The first European settlers expressed their view of the world in the entire territory of the Tajo Internacional Biosphere Reserve.

The earliest remains date back at least 42.000 years and in some places to the Iron Age; their traces have left us numerous megalithic complexes with dolmens and menhirs of untold value and beauty.

We propose to you an incredible route back in time to discover the testimony of history: the earliest religions characterised by their cult of nature and fertility, and the architecture of the earliest societies fused perfectly with the landscape. 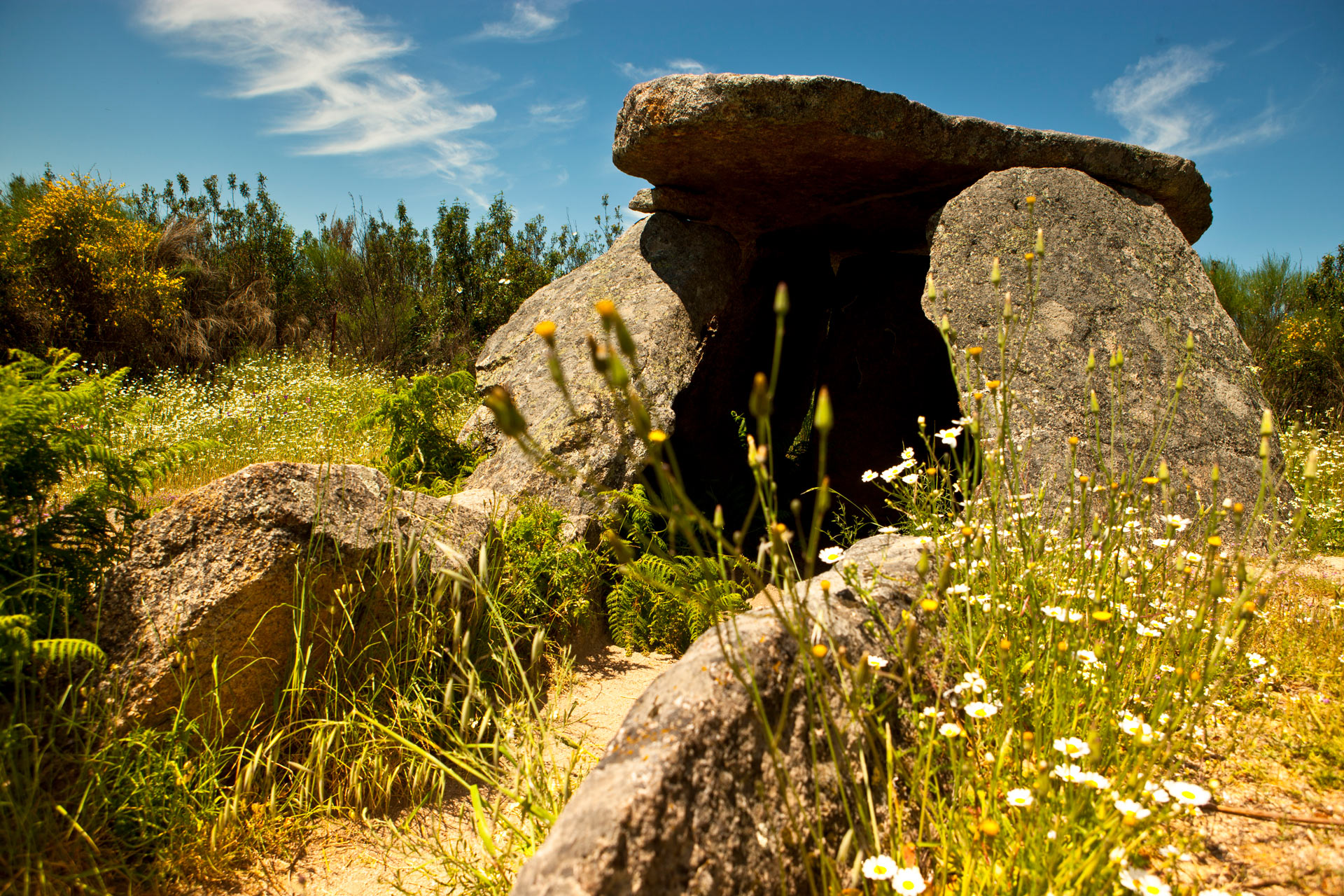 This series of 41 dolmens has been declared an Asset of Cultural Interest under the category of Architectural Area. Before visiting it we recommend that you first drop in at the Valencia de Alcántara Tourist Office; there you will be told the best way of approaching these striking megalithic monuments. Five routes have been drawn up (Tapias, Zafra, Las Lanchas, Huertas de las Monjas, and El Mellizo) to allow you to see the most outstanding dolmens of this extensive complex, which is without doubt one of the most important in the whole of Europe. 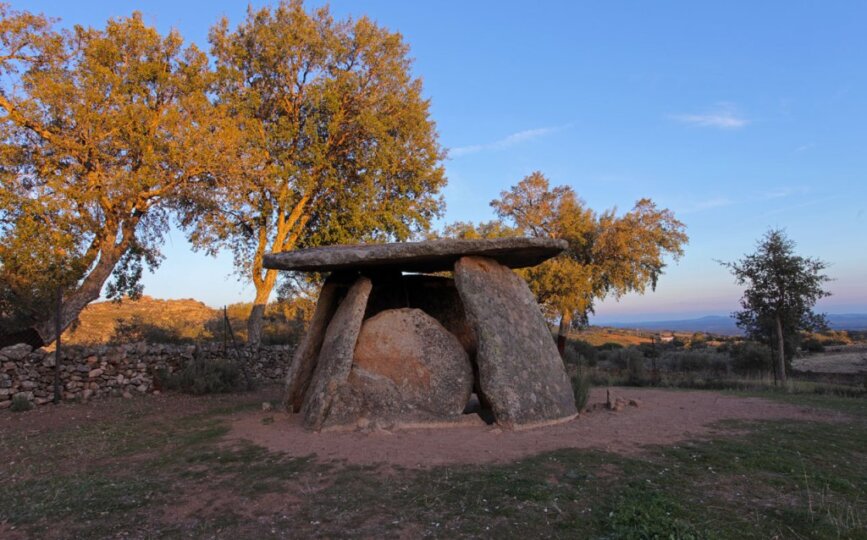 It is located at La Aceña de la Borrega in the municipal district of Valencia de Alcántara (N-521). This is one of the treasures of Extremadura and a key site for understanding the prehistory of the Tajo Internacional Biosphere Reserve. Its name (The Twin) is due to the fact that there was another dolmen nearby just like it which deteriorated to the point that it could not be preserved. This is why it is called ‘El Mellizo’ although it is also known as Aceña Borrega, Anta de la Marquesa, or Data III.

It is noted for its good state of preservation and for the lid of the burial chamber which bridges the height between the chamber and the corridor. In its interior there was a funeral trousseau, two arrowheads, and parts of ceramic items. 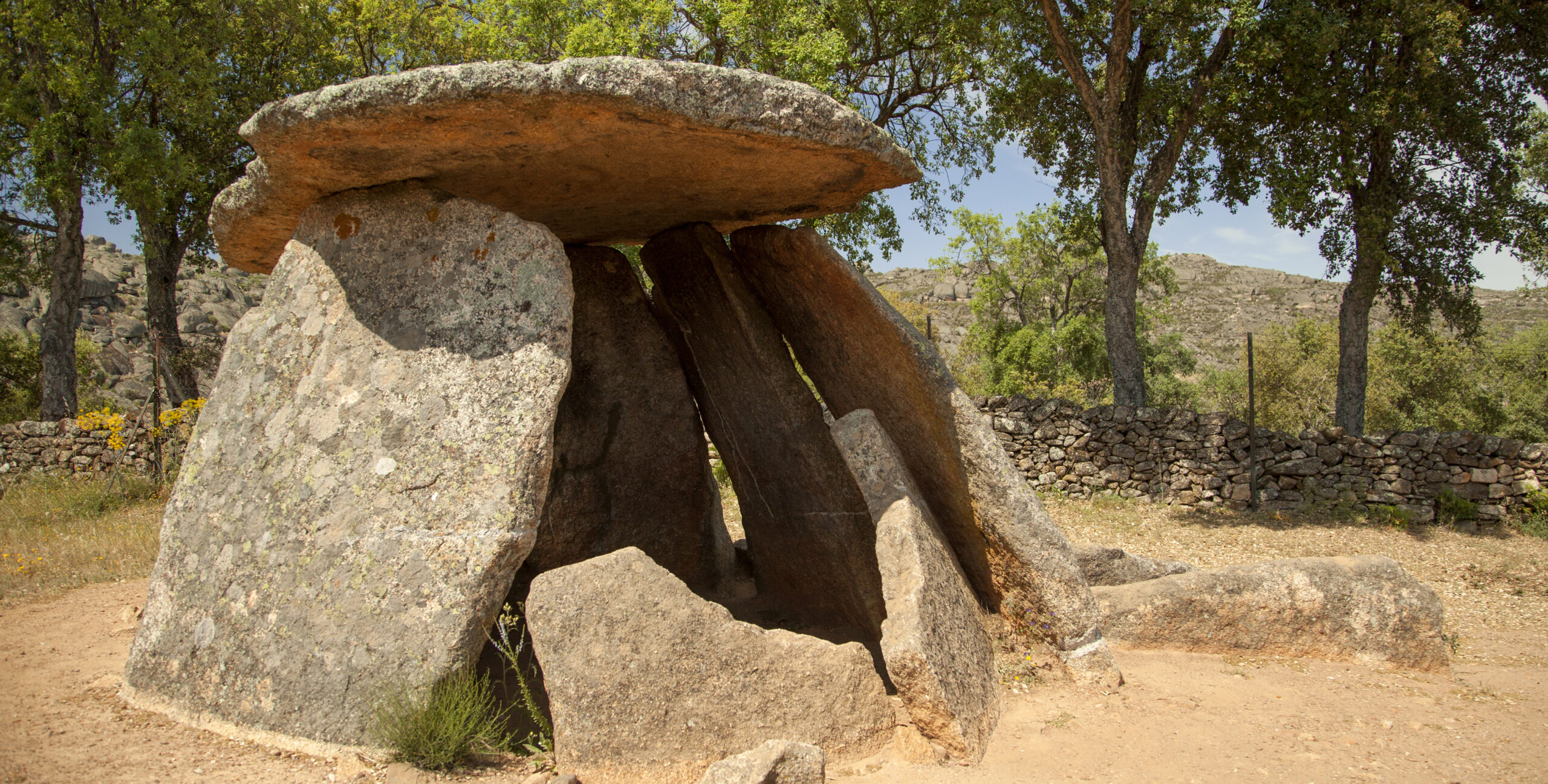 12 kilometres away from Valencia de Alcántara the imposing Puerto Roque can be made out. This exuberant natural enclave hides a great treasure: its cave paintings. To reach them you have to ascend 400 metres of average difficulty until you come to this pictorial treasure which is part of the European route of ‘Prehistoric Rock Art Trails of the Council of Europe’.

The paintings are 7,000 years old and have been executed with simple strokes: they are related to those of the area of Santiago de Alcántara and Alburquerque. It can indeed be said that with prehistoric art La Raya (the line) disappears because similar remains can be found on either side of the Portuguese border.

This shelter with its cave paintings can be reached from the N-521 in the heart of the Sierra de San Pedro. A marked path from the Chapel of San Cristóbal will allow you to get to know the richly varied fauna and flora of this spot. When you reach the cave you will find a spectacular entrance on quartzite rock. From here you enter a cavern of a depth of 18 metres which houses in its interior cave paintings of over 5,000 years old. It is considered one of the most important series of the southwest of the Iberian Peninsula.

There are other dolmens nearby such as that of Lagunita III: it is of slate and has been restored. You will be able to admire a chamber of three metres with a corridor, an anthropomorphous stele, and the burial mound covered with white quartz and altars. 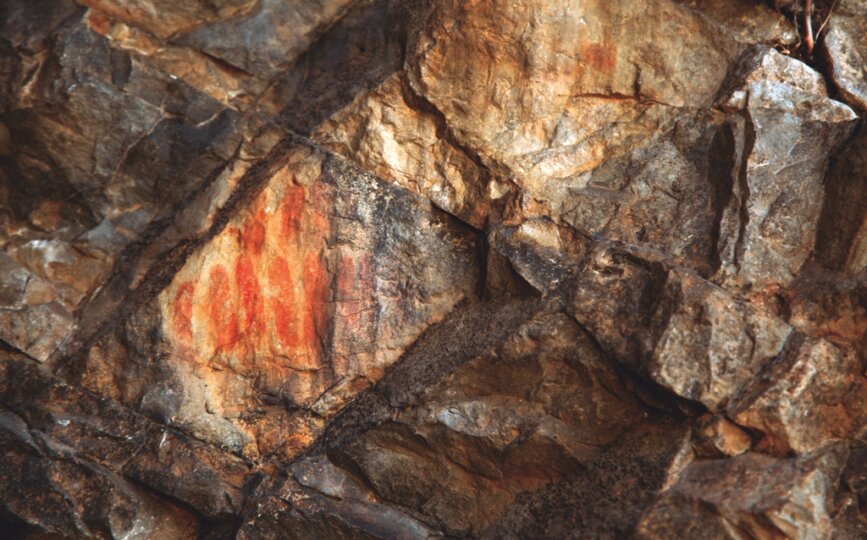 It has 23 dolmens: these small funeral spaces of slate are thus very abundant in the area. The La Joaninha Dolmen stands out among them; it was discovered in 1995 and is in an exceptional state of preservation. It is noteworthy for its slate slabs and for certain objects which were found during the excavation: sheets of flint, two axes of amphibolite, pottery, and the bead of a necklace.

The dolmens of the Cedillo Complex contrast in size with the large dolmens of neighbouring areas such as those of Valencia de Alcántara; this reveals a different economy and different social relations. 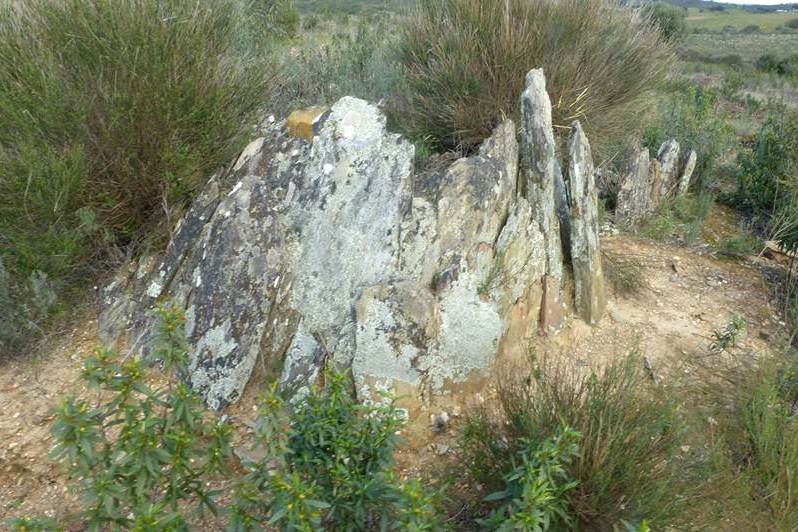 It is formed of 29 dolmens of slate; as this rock is less resistant than granite its state of preservation is not as good as that of other complexes in the area. This series is completed and enriched by 12 shelters with cave paintings and a further 4 with engravings scattered over the territory. There are routes on which to approach some of them and a Megalithic Interpretation Centre in the village of Santiago de Alcántara. 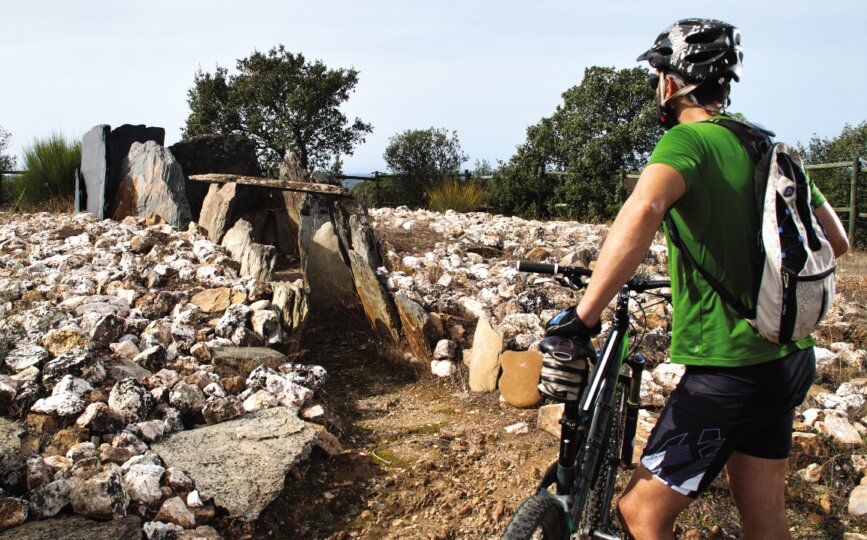 To date 5 slate dolmens are known but exploration continues and many more may yet appear. The “Bodegas” Dolmen stands out as it is one of the few which retains its burial mound and is therefore almost buried. 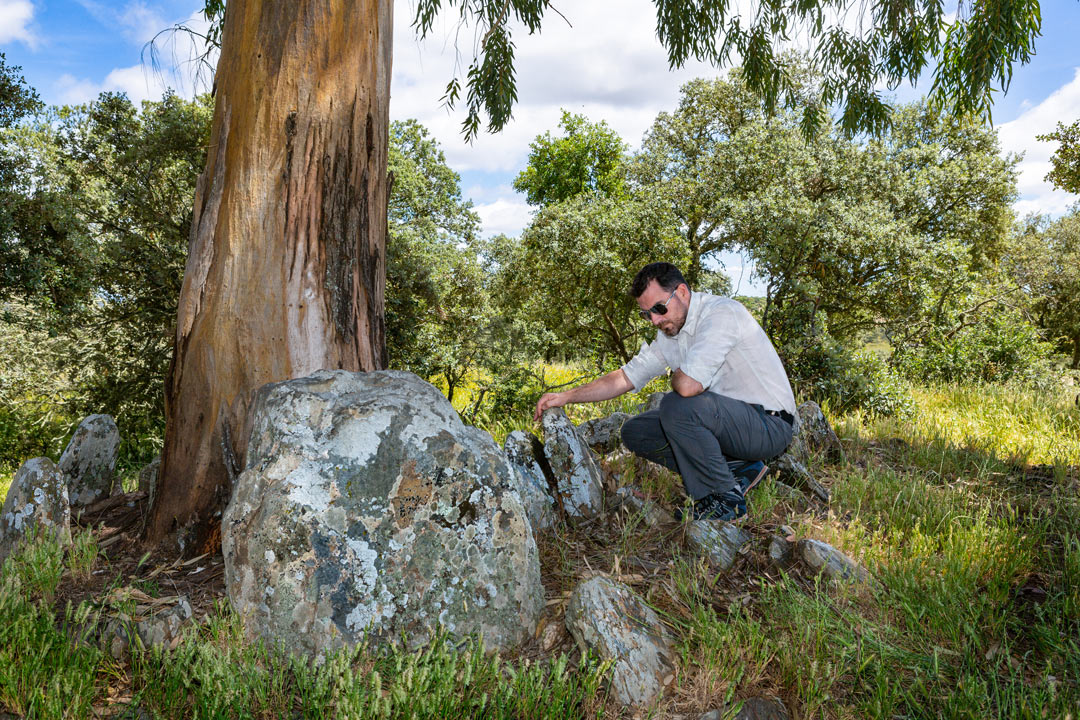 At least 50 slate dolmens are scattered over this municipal district. The Menhir El Cabezo stands out with its 4.65 metres in length; it is one of the few that remain in western Spain. It is approximately 1.2 m in diameter and has two pairs of pans with a diameter of 15 to 25 cm at both ends together with several smaller ones in the middle. 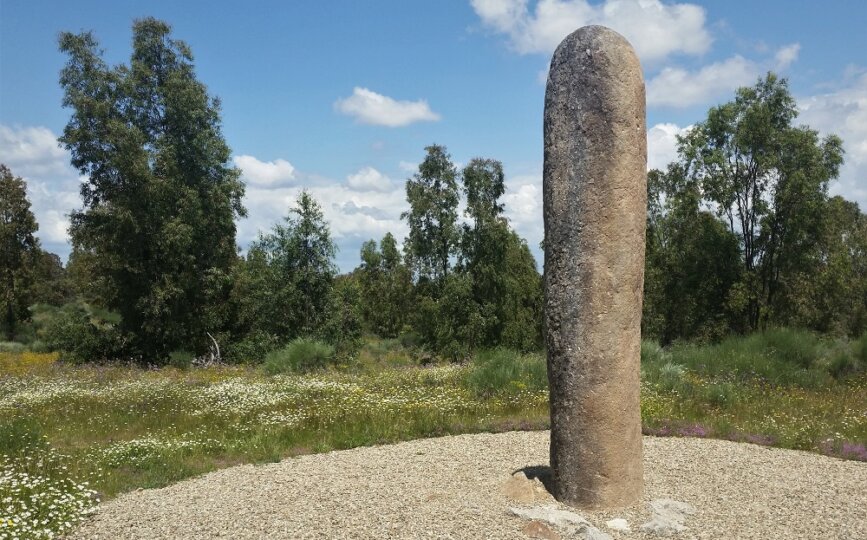 Portuguese area of the Park

One of the most noteworthy prehistoric monuments in the Tajo Internacional Biosphere Reserve is to be found in this complex. This is the Dolmen Anta or Dolmen da Melriça which was classed as a National Monument in 1910. Together with the Menhir de la Madeja it is a point of reference of immense value of the megalithic art of the Alentejo. The Dolmen de Sobral, consisting of seven pillars of granite which are largely buried, is also noteworthy; its chamber is semicircular and there is no corridor.

This menhir, which is located in the settlement of the same name, is the largest in the Iberian Peninsula. It ia dated as being from the Neolíthic and is a monolith over 7 metres high and weighing 18 tons.

When it was discovered it was split in two, no doubt owing to natural causes, it was restored in 1993 by the Portuguese government. In addition, coals from the 5th century B.C. were also found on this site. This menhir is part of the megalithic complexes of the basin of the River Sever. 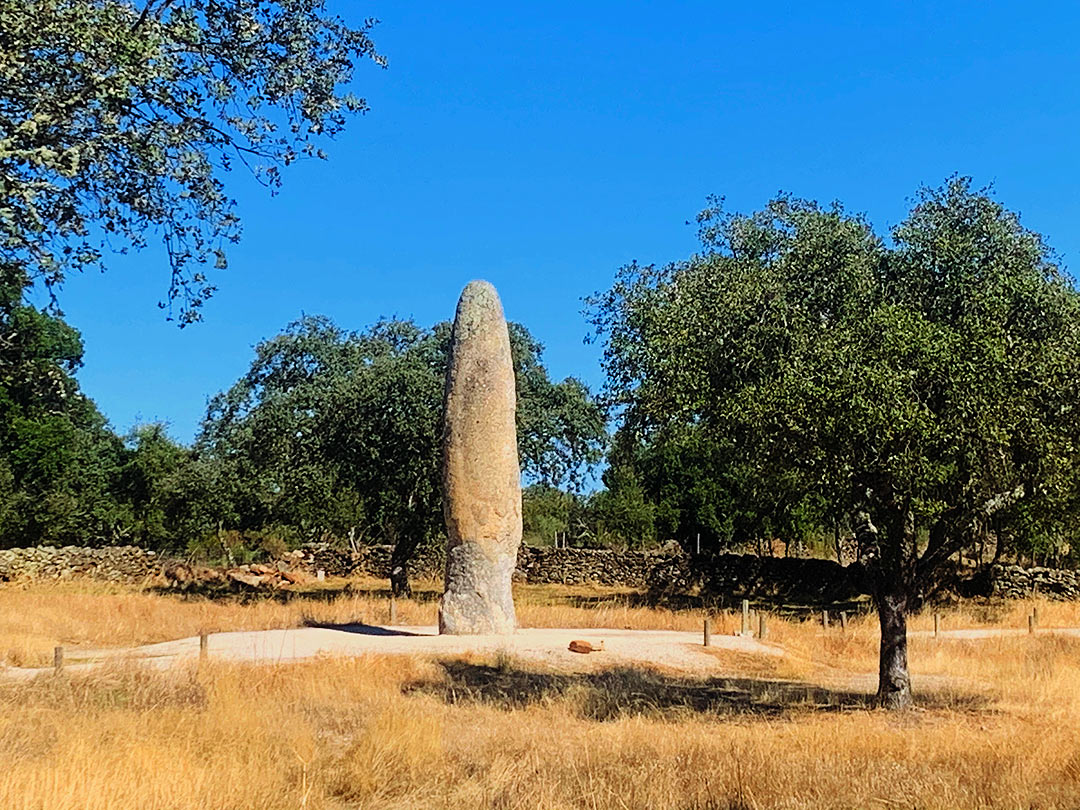 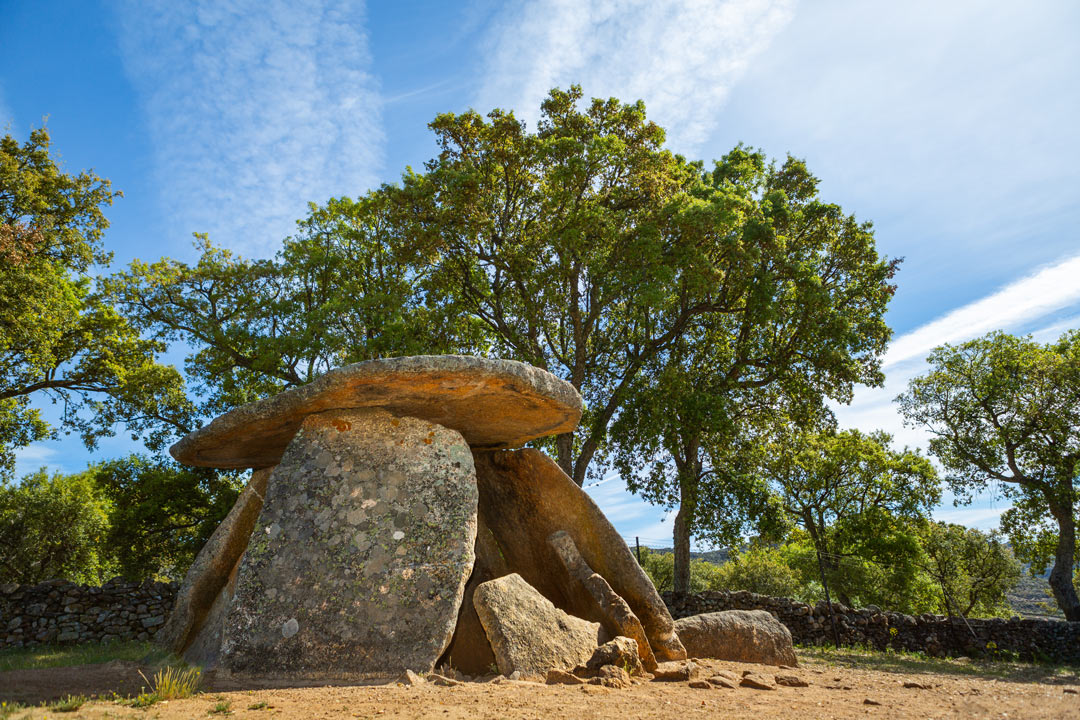 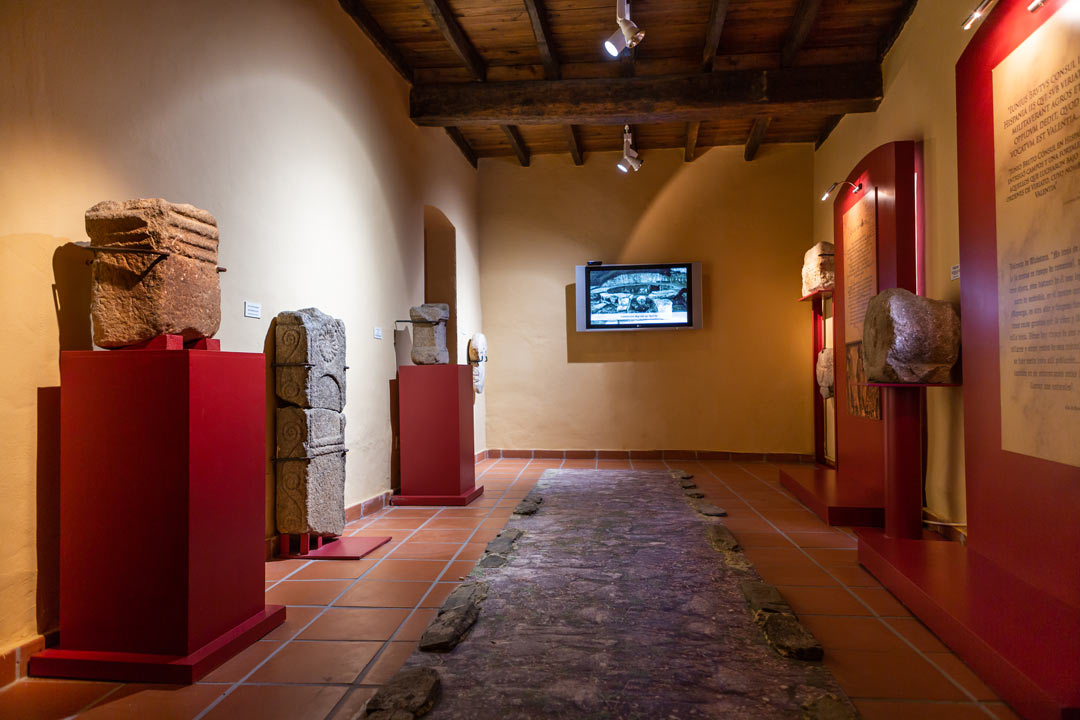