A haunt of birds and dehesas marked by history

Mata de Alcántara is set in the Tajo Internacional Biosphere Reserve and is particularly known for the ecological corridor of the Rivera de La Mata in which we can find characteristic fauna and flora together with remains of the various watermills, oil presses, etc. which gave life to the area.

Its numerous festivals and traditions include especially the unusual ‘Pela del Potro’, the inexpressible Naharro Route, the Pilgrimage of San Lorenzo in the heart of the dehesa of common land, and the Autumn-Equinox-Reconquest Market which is held on the second weekend in October around the long weekend of El Pilar.

The origin of the village of Mata de Alcántara is linked to the Reconquest and the Military Order of Alcántara. These territories were conquered by Alfonso IX of León, who took Alcántara in 1213, and handed over to the Order for their defence and organisation. From then on the command system was used by which a knight commander administered the territory to repopulate the area; La Mata is one of several villages which arose in this way. Human presence here is however much older as is shown by the existence of important remains from previous epochs in the form of Pre-Roman rock altars such as that of the “Peña Carnicera”, ancient Roman oil presses, Palaeo-Christian tombs, etc.

The 16th century saw the greatest development and growth of this area and La Mata took shape by means of the construction of its Parish Church of Our Lady of Grace by the great architect Pedro de Ibarra. In the 17th and 18th centuries the municipality suffered the effects of the wars with Portugal which involved sacking and pillaging; the same thing happened in the early 19th century with the French invasion during the Peninsular War. 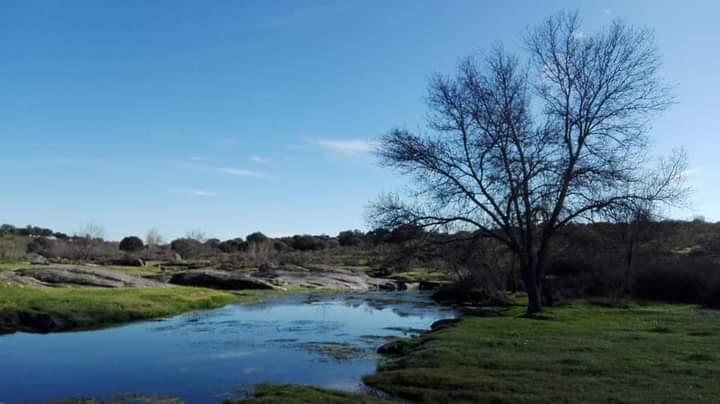 Curious fact: The Ribera de La Mata, which flows into the Tajo, was created by making use of minor depressions in the terrain and easily materials which are easily eroded to form a network of streams which are vital for the survival of certain species.

The place name of La Mata has existed since 1229. In the second half of the 19th century it was given the official name of Mata de Alcántara, although its inhabitants continue to call it La Mata.

The predominant landscape is the dehesa, which arises from the thinning out of the Mediterranean woodland combined with pastureland, olive groves, and the banks of various watercourses. Historically the dehesas of Mata de Alcántara are of great importance because they were common land which was communally exploited to benefit the whole of the village. In these dehesas we find a viewpoint for watching birds and the Galapero (a wild pear tree). The visitor can contemplate the natural environment of its dehesas and its pools such as that of Cuetos at the Ribera de La Mata, which sustain a rich fauna, in particular birds: black and white storks, herons, cranes, and ducks. 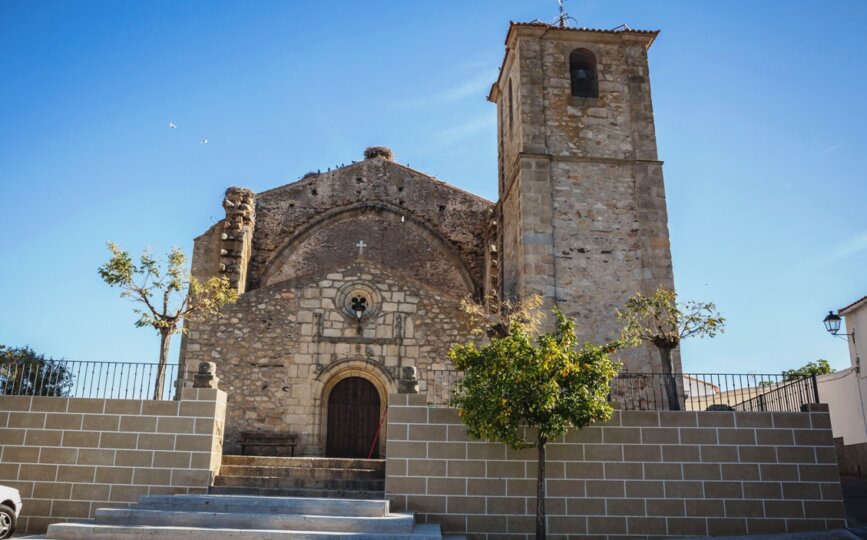 Much of this building of masonry, the work of the Extremadura architect Pedro de Ibarra, was erected during the 16th century although the tower with its square ground plan belongs to the 17th century. As the church is incomplete two clearly defined parts can be seen in its construction. Despite this it has been declared an Asset of Cultural Incident as a monument.

Its single nave is covered by a magnificent starred rib vault of the late Gothic period. In the interior several elements are noteworthy such as the high altarpiece from the late 16th or early 17th century which contains eight images, the remains of mural paintings attributed to Juan de Ribera, small side altarpieces, an image of Christ on the Cross, and a silver chalice. 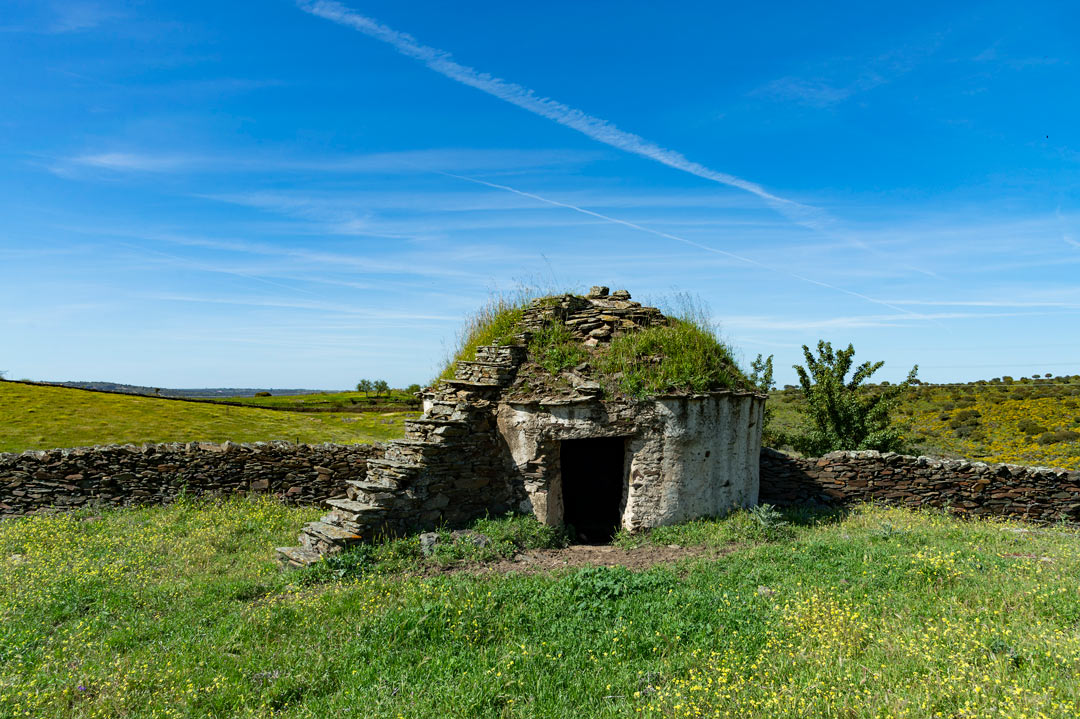 These were used for livestock and farming activities. They served as temporary shelters for shepherds and peasants. It was here where they kept their farm implements and tools.

Nowadays their traditional function has been lost owing to the mechanisation of the countryside and the modernisation of stockbreeding farms. Their structure is being imitated in the form of new constructions for rural lodging. 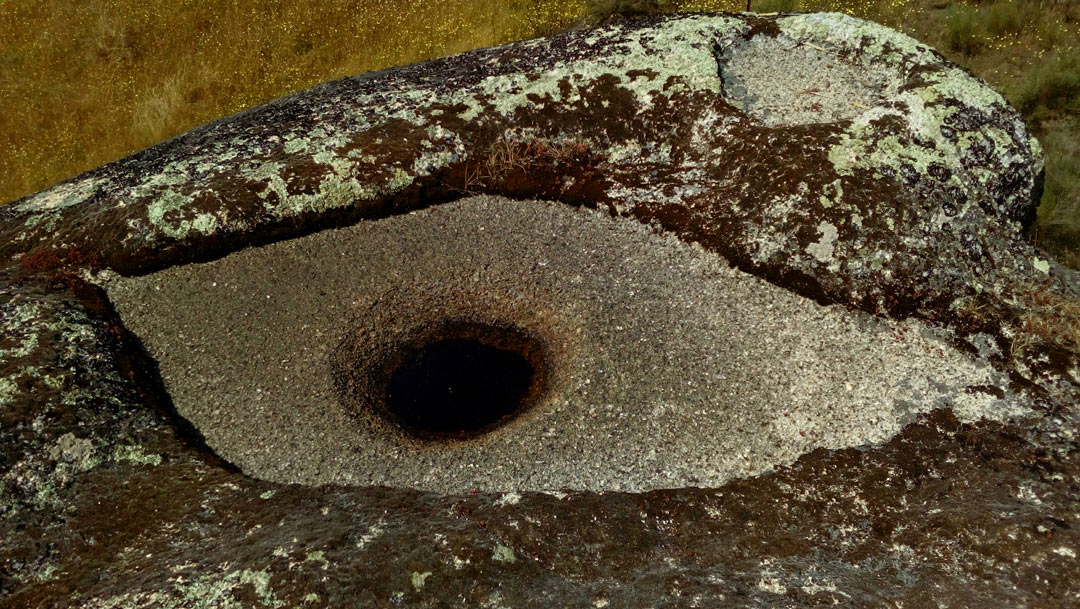 This route starts from Mata de Alcántara and leads to the rock known as the Peña Carnicera. It has a distance of 3.37 km of easy walking to the interesting Lusitanian sanctuary. The outward distance is about 52 minutes on a mostly flat trail.