“It will last as long as the world does”

The Roman Bridge of Alcántara, which has been declared a National Monument, is situated 400 metres north of the town of the same name on the road leading to Portugal.

It was a key part of the communication route of the Vía Norba, the Vía de la Estrella which linked the north of Lusitania with Emérita Augusta and with two important roads which were the Vía de la Plata and that from Lisbon to Braga. 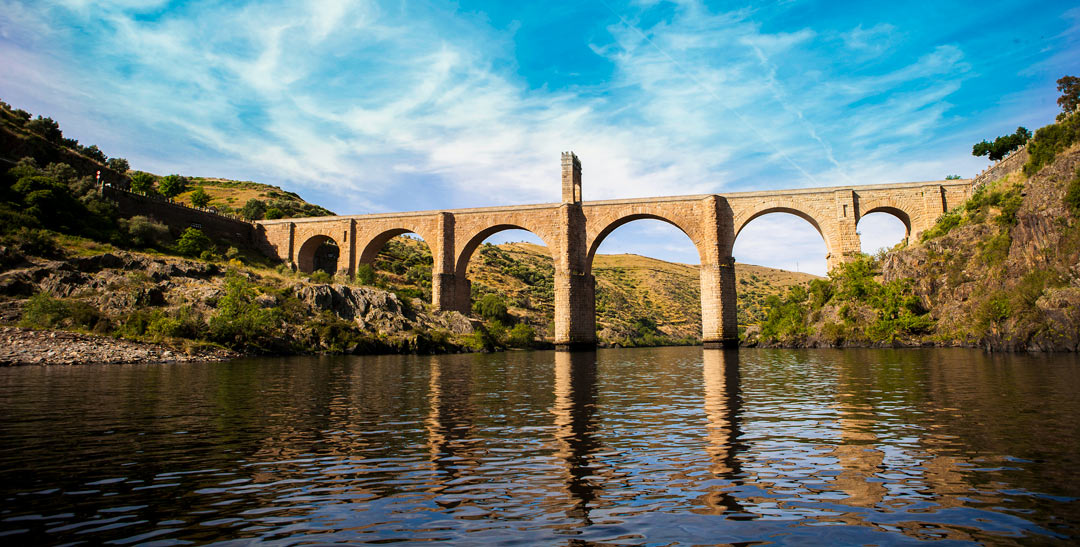 The highest Roman bridge in the world is so impressive that in the 12th century the Moslem geographer Al-Idrisi called it one of the wonders of the world. Built almost two millennia ago, “it will last as long as the world does” as its architect Gaius Julius Lacer had engraved on it: “Pontemperpetui mansurum in saecula mundi“.

It has a length of 197 metres over the Tajo. It is supported by five pillars of different heights which are adapted to the terrain. In the centre of the bridge over the central pillar rises a Triumphal Arch some 13 metres high. Although it has been modified on several occasions down the ages it retains some of its inscriptions, a dedication to Emperor Trajan, and several tablets commemorating different reconstructions of the bridge. 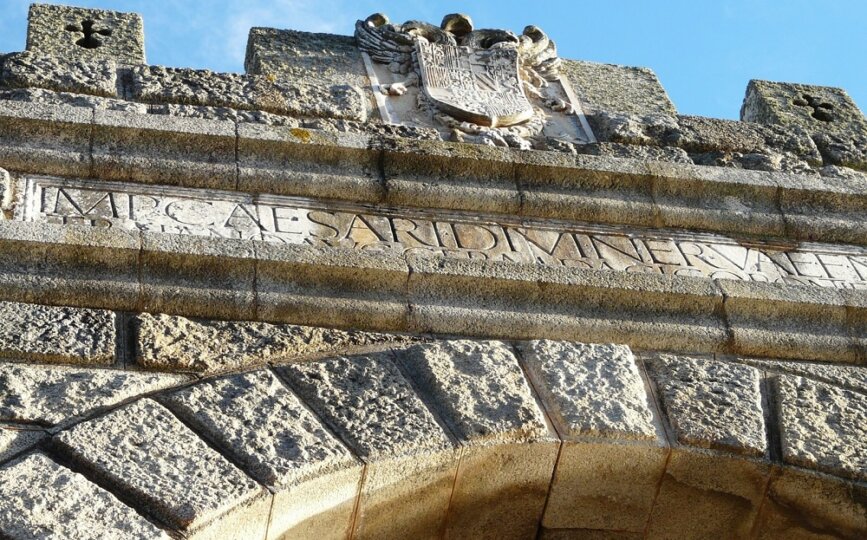 The Bridge of Alcántara was situated on the Emérita-Brácara Way which was part of the network of Roman roads of Hispania. However, this impressive work of engineering was not a public construction paid by the Roman state. In ancient Rome the bridges, Opus Pontis, were the responsibility of each region. The Bridge of Alcántara was therefore paid for by fourteen municipalities.

The site chosen on which to build it was a narrow section of the Tajo since the force of its flow was there not so great. The striking verticality of the bridge is due to the fact that the level of the water may rise considerably. The imposing Alcántara Bridge was erected probably between 95 and 105 A.D. and was the work of the Roman architect Gaius Julius Lacer. The bridge is 197 metres long and is supported by five pillars of different heights which are adapted to the relief of the terrain. The width of its two central arches is still impressive today: some 48 metres. Only two of these supports are anchored in the river, which means that at low water level the remainder of the supports are protected from the current. This is one of the reasons for its optimum state of preservation.

In the Alcántara Bridge Roman engineering shows its great ability for building perennial infrastructures. The bridge stands on solid pillars covered by dressed ashlars arranged by alternating the longer sides (stretchers) with the shorter sides (headers); this technique was later used by the Arabs. The dimensions are 60×120 cm. The result is harmonious and precise. 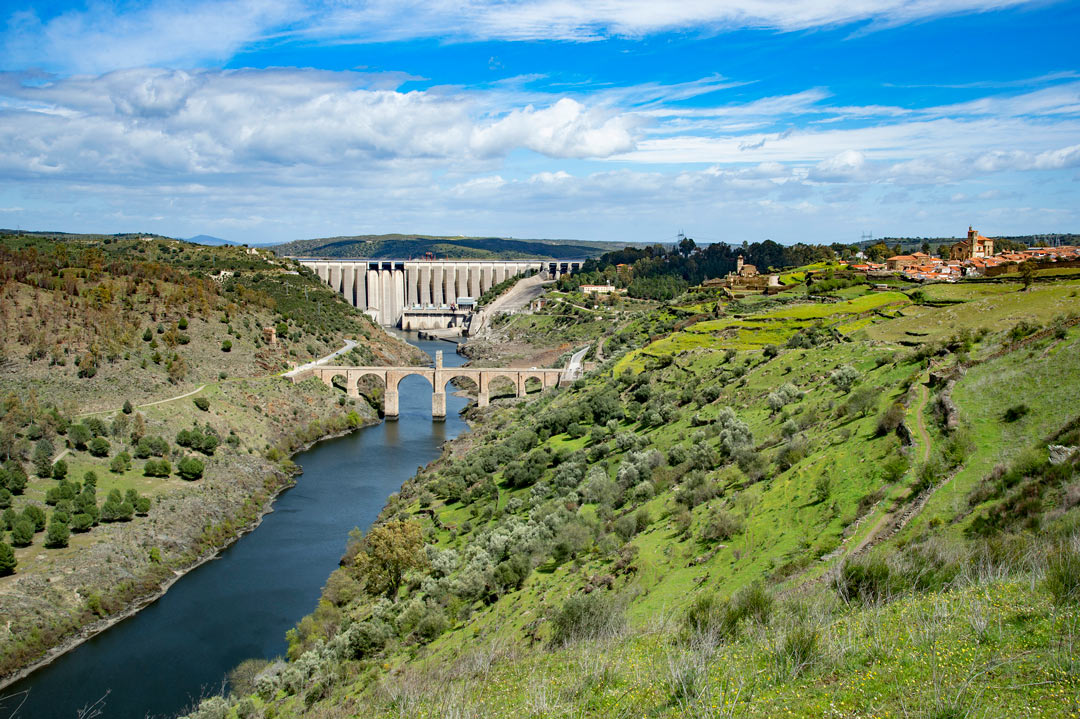 The Alcántara Bridge is crowned on the central archway by a Triumphal Arch which is 13 metres high. It retains from Roman times a dedication to Emperor Trajan; additions from later epochs include the battlements and coats of arms which crown the arch together with several inscriptions concerning the various reconstructions of the bridge from the times of Charles V and Isabel II. The bridge has a total height of 57 metres without counting the arch. The roadway has a width of some 8 metres and even today it can still be walked across and driven on.

The current name of the Alcántara Bridge comes from the Arabic Al-Qantarat meaning ‘bridge’. The first and second arches, the furthest from Alcántara, were destroyed during military confrontations, to be precise in the early 13th century in the middle of the Reconquest; in the 18th century during the War of the Spanish Succession between Philip V and Charles of Austria; and during the Peninsular War in the early years of the 19th century.

Its most important restorations took place during the reign of Isabel II in the mid-19th century and subsequently in 1969 when the construction of the Alcántara Dam left the riverbed dry and work was carried out to consolidate the foundations of the central pillars. 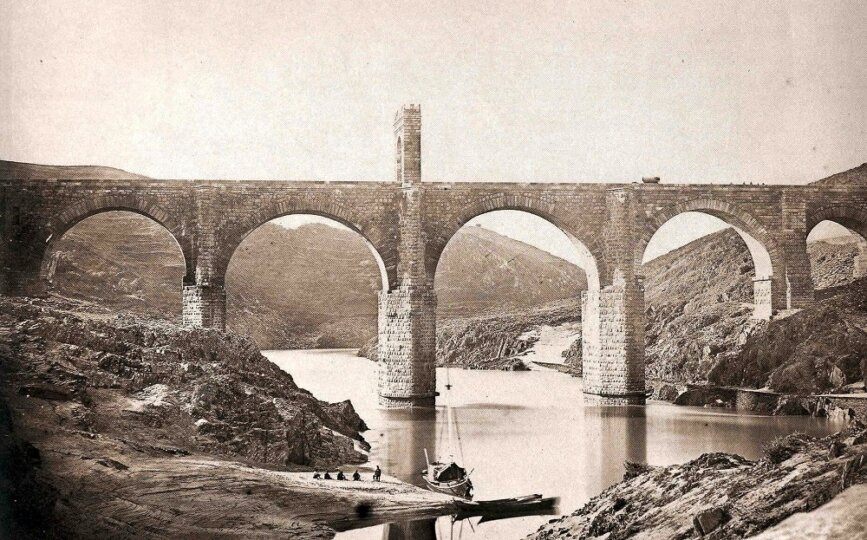 On one side of the bridge we find a small Roman temple with an inscription on the lintel which includes alongside the dedication to Emperor Trajan and the Romulean gods the name of the architect, Gaius Julius Lacer, and the phrase “Pontemperpetui mansurum in saecula mundi” (The bridge that will last as long as the world does).

It is built of stone and has a gable roof. In addition it has two Tuscan columns on its façade and its interior shows remains of a division into a inner chamber and pro-chamber. On the other side stands the 15th-century tower known as the Torre del Oro, which was built to collect taxes and to defend the bridge from possible military attack. 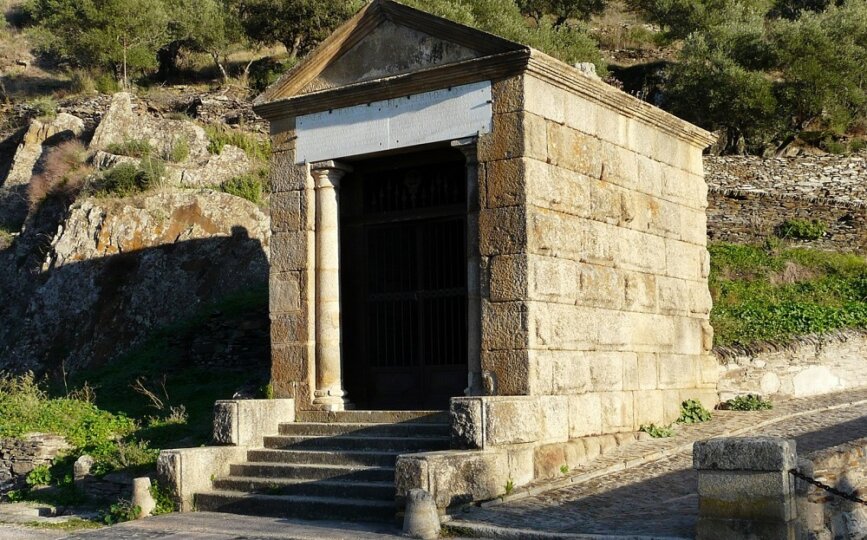 The bridge of the sword

The town of Alcántara was established much later than the construction of the bridge during the Visigothic period; it was then called “Oliva”. The Arabs subsequently baptised the twon Kantara As-Saif, the Bridge of the Sword.

Although the reason for using this name are unknown, several legends mention the magic sword Durandarte or the sword of the Visigothic king Don Rodrigo which the Arabs placed above the Triumphal Arch.

There are many reasons for visiting this magical place steeped in history which is surrounded by nature and very close to one of the heritage treasures of Tajo Internacional, the town of Alcántara.