Heritage and nature on the frontier

Zarza la Mayor is the most westerly town of the municipal association of Rivera de Fresnedosa and is the only municipality in it to border on Portugal. Its municipal district is delimited by the River Alagón in a strikingly beautiful landscape, the Canchos de Ramiro; the River Erjas marks the border with Salvaterra do Extremo in Portugal.

The history of Zarza la Mayor shows that it was of great importance during the Moslem invasion of the Iberian Peninsula, from which the municipality still retains fortresses such as Racha-Rachel and the Bernardo Castle. After the Reconquest the Order of Alcántara repopulated the locality to found the command of Peñafiel and La Çarça. Declared a town in 1356, it had a time of splendour in the 16th century which was curbed by the Portuguese Restoration War in which the Portuguese forced the inhabitants of Zarza into exile between 1665 and 1668. The village was again occupied during the War of the Spanish Succession between 1705 and 1713. It is this frontier situation which has marked the history of Zarza since its beginnings. The continuous wars between both countries forced the exile of its inhabitants on several occasions and the village was set on fire no less than four times. 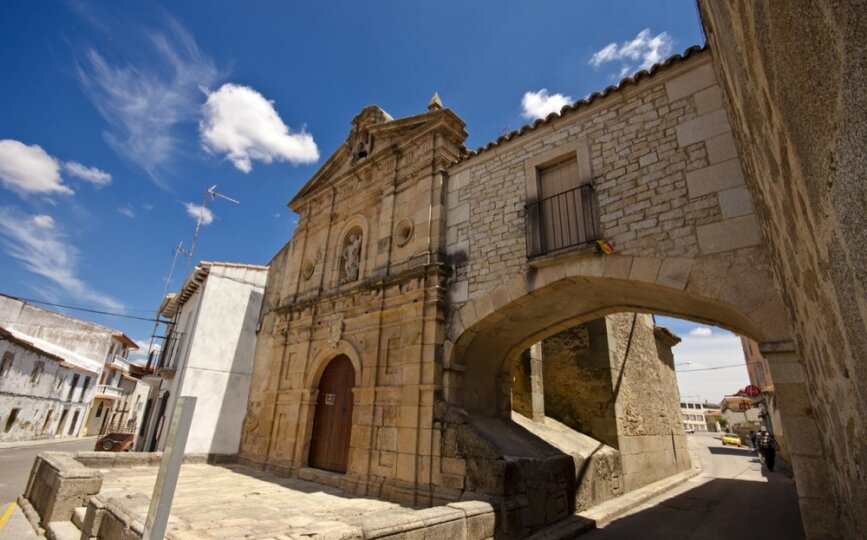 Curious fact: The surname of “la Mayor” was granted by Philip IV to reward the heroism and the fierce resistance of its inhabitants during the various occupation attempts in the wars with Portugal.

Its strategic location also made the village an important village on the smuggling routes of La Raya. Many families exchanged produce as the only way to survive in a setting of large estates owned by councils such as that of La Mesta, orders such as that of Alcántara, or families of noblemen. During the 18th century the establishing of the Royal Silk Factory was a milestone in the development of Zarza as it made it the centre of intense business activity.

Zarza la Mayor is a point of reference for rural and nature tourism. Any visitor can enjoy landscapes as striking as the Canchos de Ramiro and the Tajo Internacional Biosphere Reserve, trails such as the Contraband and Montón de Trigo routes, walks in the canyon of the River Erjas, and the views from Peñafiel Castle. 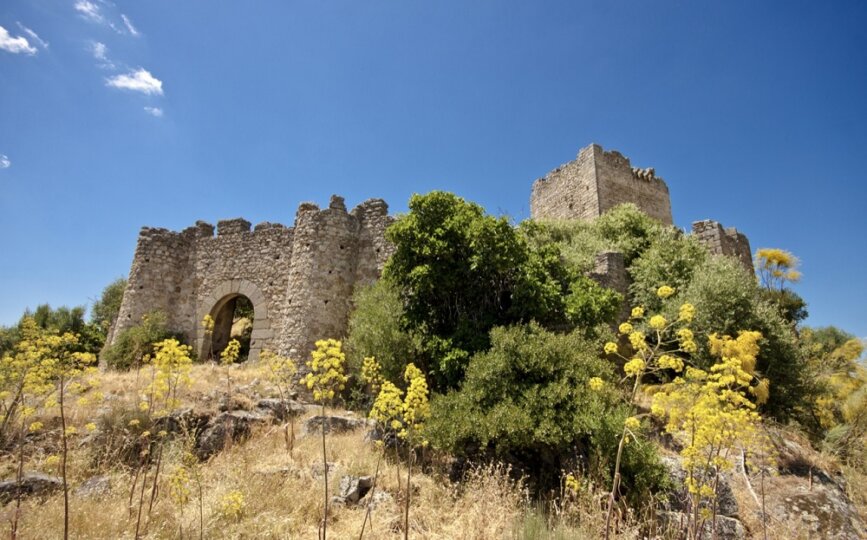 It is also known for being the ancient Moslem fortress of Racha-Rachel. The name of Peñafiel Castle was given it by the Christians. The hiking route which reaches it to then enter Portugal also takes its name from it.

The earliest remains of this castle belong to the 9th century when the Berbers erected a watchtower over the frontier lands. Down the centuries its walls have seen many battles such as those fought by Christians against Moslems or Spaniards against Portuguese. After its Reconquest by Alfonso IX the castle became the property of the Order of Alcántara. Nowadays we can observe remains of the 16th-century fortress, two defensive perimeters, and its keep, which survives as its main and most majestic element. 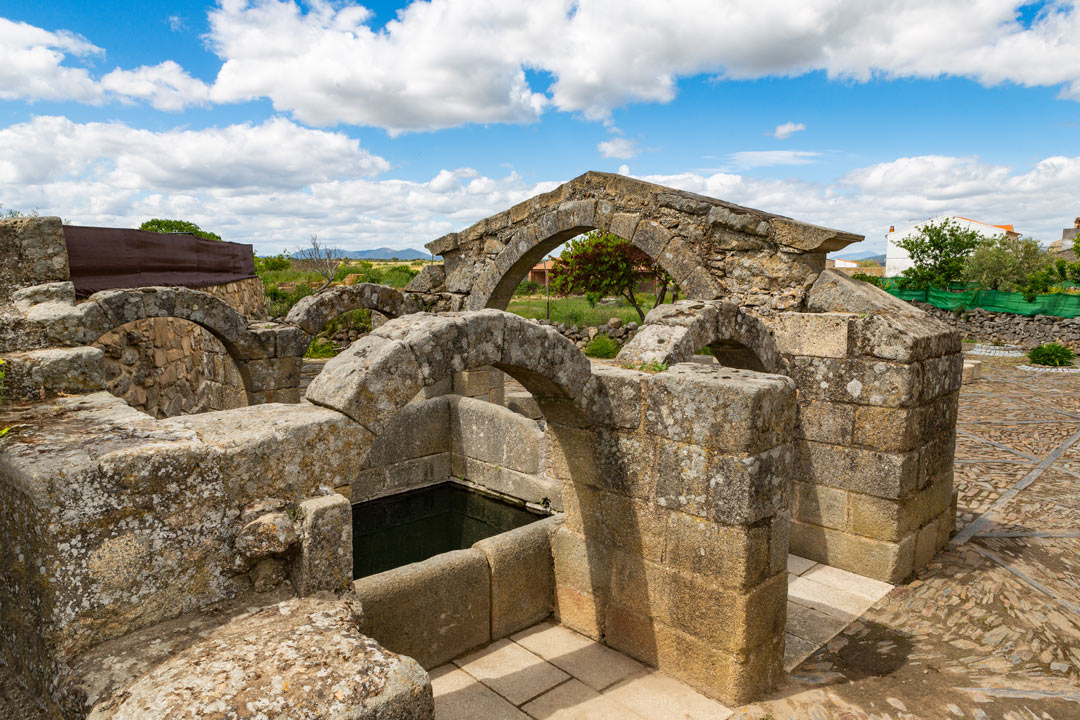 This fountain is one of the most emblematic monuments of Zarza la Mayor. It is probably of medieval origin and is an important example of functional popular architecture. It was built owing to the people’s’ need for provisioning themselves with water from a point near their homes. This gives rise to its name, which is directly concerned with the growing Council (Concejo) or assembly of inhabitants of Zarza at the time.

It stands out for its striking central lancet arch and well polished ashlars of granite which recall the convulsed past of this area of Extremadura. The fountain was roofed with slabs of the same granite material but these disappeared with the passage of time. During the 17th century the fountain was partially reconstructed by master builders sent from Portugal specifically for the purpose. 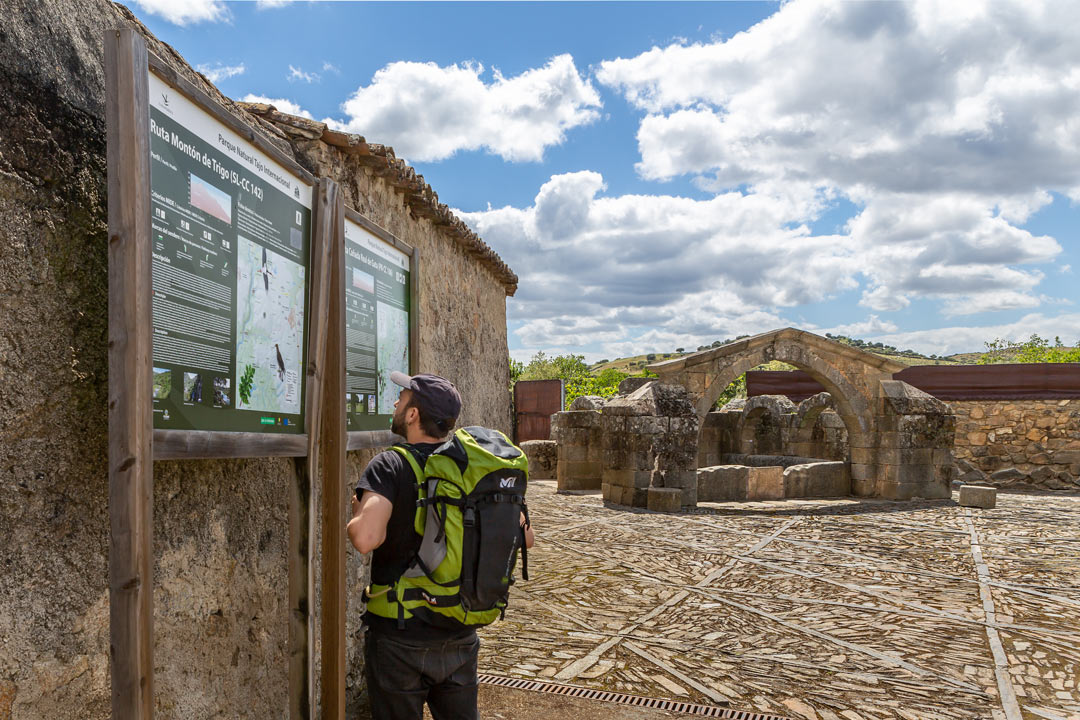 Cross-border Contraband Route: This route has a length of 15 km there and back and presents no difficulties. It takes about three and a half hours to cover the distance from the Town Hall of Zarza la Mayor to Salvaterra do Extremo in neighbouring Portugal.

The route is that followed by the old smugglers to pass coffee illegally from one side of La Raya to another between Extremadura and Portugal. They would travel either on horseback or on foot, but always on moonlit nights to avoid arousing suspicion.

Montón de Trigo Route (SL-CC 142): This linear route, which has a distance of 8.8 km and presents no difficulties, can be covered in two and a half hours. It starts from the village of Zarza la Mayor and goes as far as the River Erjas, which in this area serves as a natural border with Portugal. It is a relatively short path and crosses a very interesting landscape, as among other things its end at the river offers a fine picture of La Raya.

The first section follows the Gata Royal Drovers’ Road (to coincide with the route of the same name) through an eminently stockbreeding landscape of stone walls. After leaving the drovers’ road, the route begins to descend towards the river on a lane parallel to the La Grera Stream; the terrain becomes more and more rugged until you cross a hiking pass and penetrate a rocky area where holm oaks, hawthorns, terebinths, and hackberries are abundant. Finally it crosses a small ravine with willows and ashes which takes the form of a stream before it flows into the River Erjas; a metallic walkway has been installed to give access to the viewpoint over the river. This is a good place to find vegetation characteristic of rock fissures such as friar’s cowls, ferns, and fiddle dock.

During practically the whole of the route, especially on the last section, it is easy to observe large birds of prey such as griffon vultures, Bonelli’s eagles, short-toed eagles, and buzzards together with numerous small birds such as serins, goldfinches, Sardinian warblers, and hawfinches.