Alcántara was a noble town with an extensive heritage. Its name comes from the Arabic and means “the bridge”. It is no coincidence that it bears this name as the town has a magnificent Roman bridge over the River Tajo. However, it had already been inhabited much earlier as is borne out by the presence of the Menhir del Cabezo, the Bronce de Alcántara, and its megalithic complex consisting of over 50 dolmens. In the 13th century Alfonso IX of León snatched the town from the Arabs and during the Middle Ages it was the headquarters of the Military Order of Alcántara. For this reason the locality grew in importance and splendour as can be seen by the architecture of the period. During the 16th century numerous inhabitants of the city played a decisive role in the exploration of the American continent.

The Roman Bridge of Alcántara is one of the symbols of its municipal district. Erected in the 2nd century A.D. and magnificently preserved thanks to restorations, even today it continues to allow communication with neighbouring Portugal. It was declared a National Monument in 1924 and its height exceeds 70 metres. Its bearing and its excellent state of preservation make this a monument that must be visited.

It was in Alcántara, to be precise at the Conventual de San Benito, where the French marshal Junot seized the monks’ recipe book as a present for his wife, who internationalised the gastronomy of Extremadura on publishing it as her own. The name of some of the recipes evolved such as that of the ‘consumed’ soup which became consommé. Other names were however unchanged and today continue to refer to the town, such as partridge Alcántara style.

Alcántara is in the heart of the Tajo Internacional Biosphere Reserve and holds the Tajo Internacional Nature Reserve Interpretation Centre and its Visitors’ Reception Centre. A stroll through the streets of Alcántara, which are full of noble coats of arms, will be sufficient to give you an idea of its heritage and its historical importance. Of all its monuments, the Conventual de San Benito, which was declared a National Monument in 1914 and was the headquarters of the Military Order of Alcántara, is one of the most important. Contemplating its Gothic cloister and its outer façade of Renaissance style known as the Gallery of Charles V is a highly recommendable experience.

If you want to explore and get to know Alcántara in an original and entertaining way, don’t miss this Outdoor Escape Route. 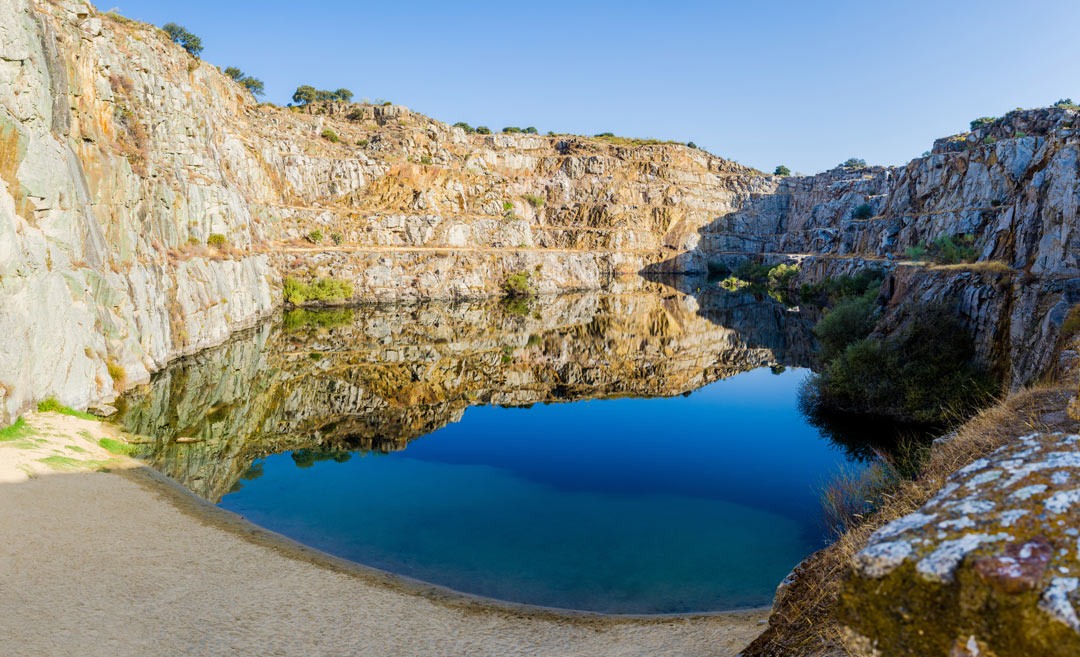 From the Roman Bridge on the way to Piedras Albas we can make a stop at the Alcántara Quarry, a deep pit which was excavated to obtain rock for the construction of the dam to create an artificial wetland area with steep cliffs.

At this beautiful artificial lake, with spring waters suitable for bathing, some pairs of black storks, griffon vultures, and Egyptian vultures nest on its steep crags. 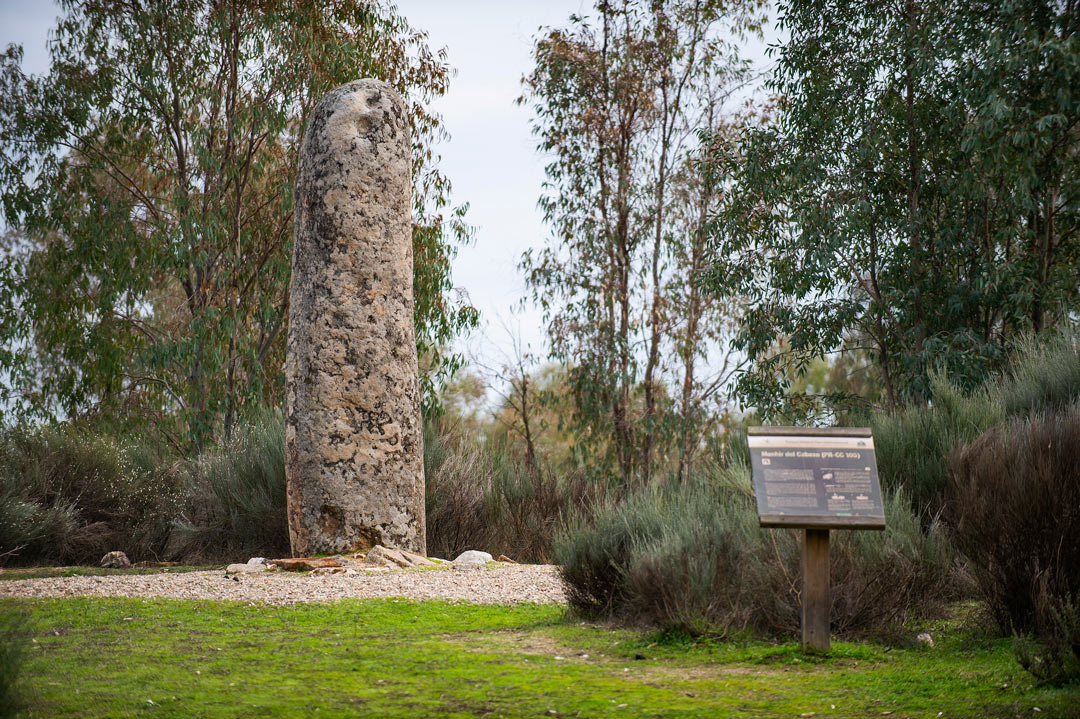 This is one of the few menhirs known from Extremadura Upland and perhaps one of the oldest megaliths in the region. For decades it remained on its side and almost forgotten. Fortunately, as part of an excavation initiated in 2008 by the researchers Primitiva Bueno y Rodrigo de Balbín, it was erected once more in 2015. In common with other monuments of these characteristics, it is enigmatic and has engravings. There is no doubt that the Menhir del Cabezo is one of the finest and most spectacular menhirs of Extremadura. 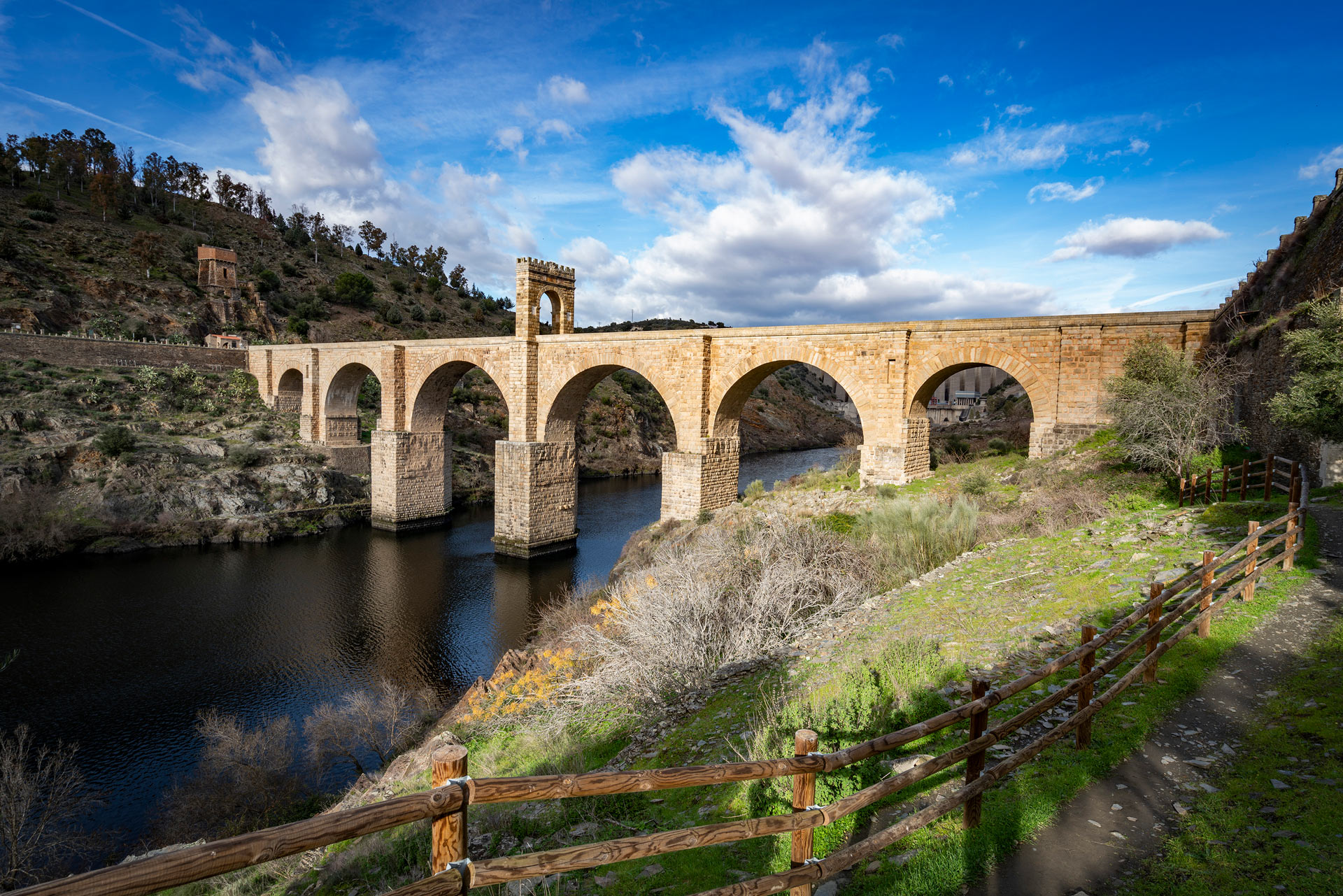 It was built and paid for by several Lusitanian municipalities. The work must have been started in about the year 75 A.D. under the direction of Gaius Julius Lacer and was completed in about 103-104 A.D. in the times of Emperor Trajan, to whom it was dedicated. The Roman ensemble consists of three elements: the bridge, the arch, and the temple. The bridge is 194 metres long, 8 metres wide and 71 metres high, including the arch. It is built of dressed granite masonry, in honour of the imperial Roman system, the Triumphal Arch was provided with battlements in the times of Emperor Charles V. As a key element of communication the bridge was destroyed in certain military confrontations. In the early 13th century the first arch on the right-hand bank was knocked down. According to some researchers, it could have been repaired prior to the 16th century. The first documented restoration occurred in the 16th century when Charles V was emperor. Of the ancient defensive system the only element currently remaining is a tower of slate and brick known as the Torre del Oro. In the early 18th century the confrontations during the War of Spanish Succession caused serious damage to the second arch on the right-hand bank, which was to be restored during the reign of Charles III. During the French domination the second western arch was again destroyed. A makeshift solution was achieved with timber which was subsequently burnt in 1836 during the Carlist Wars. On 4th February 1860 a restoration was inaugurated under the aegis of the Royal Academy of History and directed by the chief engineer Alejandro Millán y Sociats. The bridge was declared a National Monument on 13th August 1924. 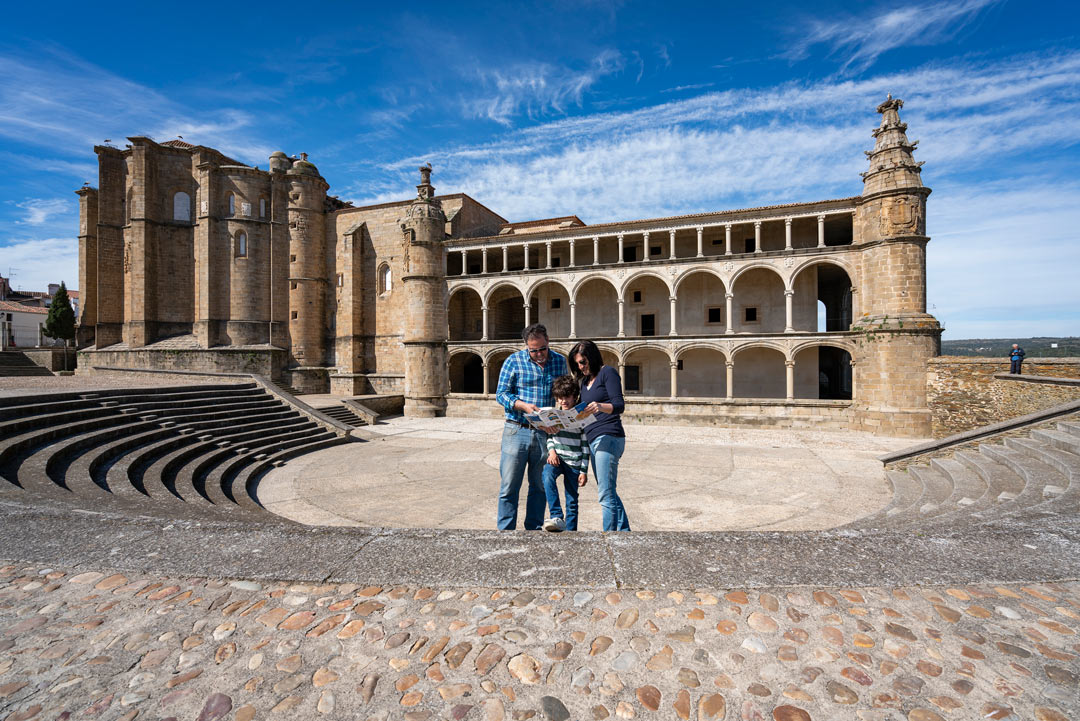 The Order of San Julián del Pereiro, which was founded in 1176 on Portuguese soil, changed its name to the Military Order of Alcántara in 1218. The Order played an important part in the Reconquest, during which extensive territories were annexed to give it an important economic and military position. In the early 16th century a Royal Privilege was granted for the construction of the new building which was to be the headquarters of the Order of Alcántara. Work was initiated during the reign of the Catholic Monarchs in 1505 and continued until 1574 under the direction of various architects including Pedro de Larrea, who was responsible for the construction (during the final Gothic period) of the cloister and some surrounding rooms. Pedro de Ybarra, who worked in the second half of the 16th century, by then in the plateresque period, built the church and the guest quarters. On the east façade can be found the Gallery of Charles V, which was part of the guest quarters of the monastery. Its structure is divided into three storeys and it is flanked by two cylindrical towers, one of which bears the coat of arms of Charles V and the other that of Philip II. The unfinished church which is dedicated to the Immaculate Conception is of Renaissance design; it consists of three naves with ribbed vaults. Two coats of arms of Charles V dominate the central nave; the side ones correspond to the chapels of the Knight Commanders Diego de Santillán and Nicolás de Ovando. In the transept, which is on one side, opens out the chapel of the Knight Commander of Piedrabuena, Antonio Bravo de Jerez, and the other contains the vestry with its original spiral stairway. In what was formerly the kitchen garden of the monastery, a auditorium was constructed which serves as the setting for the Alcántara Classical Theatre Festival.