Tajo Internacional has a network of Identity and Interpretation Centres which provide the visitor with essential information for getting to know in depth the cultural, historical, and natural particularities of its villages and its environment.

These centres offer services of information, customer attention, and basic interpretation so as to understand the main values of this enclave and in addition organise numerous environmental education activities throughout the year.

This centre, which is located in a 16th-century stately home popularly known as “Casa Natalio”, provides full information about the Nature Reserve and the Tajo Internacional Cross-border Biosphere Reserve, its natural and cultural values, its routes, and its villages. Inside it has all kinds of didactic resources (interactive points, scale models, screenings, games, workshops, and environmental education activities) to share with the visitors the values of this protected area.

Located in the 13th-centre Chapel of El Péndere, this centre has a room on landscapes and ecosystems, flora and fauna, dioramas, panels, an interpretative scale model and audiovisual screening, and a planisphere on the dome of the chapel to disseminate the values of Tajo Internacional and spread local resources. It can be visited by appointment and 9 routes have been marked in the municipal area.

The Centre was created to spread information about and interpret the rich prehistoric heritage preserved in this territory. It stands out because its installations are underground and its external appearance is that of a large dolmen of some 200 m2. The public enters the centre through a long corridor which simulates the hypothetic entrance to a burial mound. At the end of the corridor there is a large polygonal room in which the megalithic importance of the area is shown by means of reproductions, scale models, panels, and videos.

This centre opens only if you make a reservation at the “El Péndere” NIC.

The visitors’ centre was built to spread infornation about and interpret the rich heritage of the town. It is located in a stately home in the heart of the Gothic Quarter and explores the history of Valencia de Alcántara and its most important tourist resources. These include in particular its dolmens and the most relevant events such as the “Royal Wedding” and the inauguration of the Madrid-Lisbon train “The Short Route”, in addition to the coexistence of the Three Cultures and an archive of old photographs.

The “El Casón” Visitors’ Centre has various explanatory and didactic resources (video-documentary, reproductions of the most representative species of fauna and flora of this protected natural space, an interpretative scale model, etc.) which provide basic information on visiting the Tajo Internacional.

The building which houses the Visitors’ Centre contains an ethnography exhibition, a library, a viewpoint from which to contemplate the River Tajo, Portugal, and the village itself, and services such as guided tours.

The Environmental Interpretation Centre (EIC) presents a thematic exhibition on the territory which consists of 14 teams of interactive exploration which approach different aspects of the natural heritage (fauna, flora, geology, and hydrology) and the cultural heritage of the territory, and also provides information on nature activities which can be carried out. It emphasises the possibility of a virtual trip by kayak on the River Tajo.

Entrance is free and the EIC team gives guided tours.

This Interpretation Centre, which is located in the Tejo Internacional Nature Reserve, introduces the biodiversity and habitats of the town of Idanha-a-Nova in an interactive manner by means of media devices. It approaches rocks and relief forms as a support for biodiversity in addition to the habitats and landscapes of the Beira Alentejana, and exhibits the materials used in historical constructions.

The BIC also has a space for temporary exhibitions and a store of regional products where visitors can sample and purchase, among other delicacies, the best cheese, olive oil, sausages, and honey of the producers of the “Terras de Idanha” region.

It is also possible to obtain information on the Mines Route, which is one of the main hiking routes of the village of Segura. 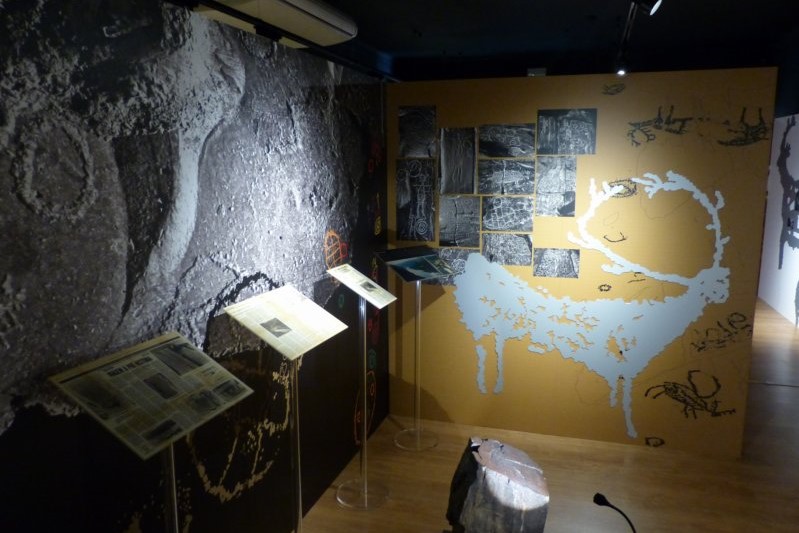 The Tajo Valley Rock Art Interpretation Centre (Centro de Interpretación del Arte Rupestre del Valle del Tajo, CIART) has two permanent exhibitions: Arqueología de Ródão and Tajo Valley Rock Art. Both demonstrate to the visitor the importance of the early occupation of this land by human beings as a result of the more than 20,000 post-Palaeolithic engravings which are distributed all along the Tajo Valley, many of which are now below the waters of its reservoir. The natural monument of the Puertas de Ródão, their origin and formation, the life of our hunter-gatherer ancestors, the peculiarities of rock art, and various events of more recent times such as the Roman, medieval, and contemporary periods are other milestones which are explained by means of various didactic resources in these exhibitions.

The Hispano-Jewish community, before its expulsion in 1492 owing to the Alhambra Decree, and the converted Jews who remained left a mark which can still be felt and which deserves to be shown and enhanced. Their trades, their rituals and religious objects, their festivals, their language (Ladino), the structure and significance of the space which is the synagogue, among other aspects, left traces in the places they inhabited such as the Jewish quarters of Valencia de Alcántara, Alcántara, and Brozas.

Many of the Sephardic families who lived in this territory were forced to flee to Portugal after the edict, settling in the Jewish communities established in Castelo de Vide, Castelo Branco, and Belmonte, among others. Their influence and legacy nowadays make Tajo Internacional a territory where the mark of the Sephardim remains alive in its streets, buildings, and gastronomy and in the whole of the cultural and intellectual legacy it left behind.

The ethnographical and cultural richness of Tajo Internacional is the main theme of this open-air centre, a novel approach for enhancing the intangible heritage which shapes the identity of this territory.

Panels placed in two “museum stations” show on the one hand some of the festivals, traditions, popular trades and crafts, and manifestations of the language together with elements of popular architecture. At the second station located on a section of the Alcántara Drovers’ Road, the panels tell us of the importance and the mark of transhumance in Tajo Internacional.

Each panel is complemented by recordings of interviews of people from the territory who share with us their knowledge of each subject dealt with.

The influence of the main military orders of the Iberian Peninsula in the Middle Ages and in particular of the Order of Alcántara, the headquarters of which was the Conventual de San Benito in the town of Alcántara, is the theme dealt with by these two centres. The latter complement each other to offer the visitor an idea of the power and the huge importance of these military orders at a religious, political, social, and intellectual level. Their mark continues to be visible in the architecture, the arts, the gastronomy and the structure of the territory, among many other aspects.

Visitors will get to know the Hispanic orders: Montesa, Calatrava, Santiago, and of the Temple, and naturally that of Alcántara which is given greater importance than the rest.

Tajo Internacional has one of the most important megalithic complexes in Europe, not only because of the large number of dolmens and menhirs which have been found on both sides of the border but also because some of them are in an excellent state of preservation.

Since when have we human beings been living in this land? What can be the significance of these huge masses of granite and slate which are grouped together to form figures in impossible balance? How were these prehistoric men and women capable of moving these massive stones and for what purpose did they do so? All these questions and many others are answered in this interpretation centre in Valencia de Alcántara.

The internal organisation of the Order of Alcántara and the mechanisms of the administration of a command such as that of Peñafiel are the themes dealt with by this centre located in Zarza la Mayor. The role of the military orders as institutions which defended and administered the re-conquered territories and the figure of the command as a unity of production are examined. Visitors will discover the lives of the friars of Alcántara, their possessions, the duties they carried out, and the power they held for several centuries.