A noble town with history and protected landscapes

Brozas is located in the so-called “Lands of Alcántara” of the Tajo-Salor-Almonte municipal association. It has been a Historical-Artistic Ensemble since 2015 owing to its rich historical heritage with evidence starting in prehistory and continuing in the Roman period and so to the Middle Ages and the Modern Age, when the town enjoyed its greatest historical splendour. Despite the first traces of civilisations in the area, the history of what is now the town of Brozas did not begin since the León Reconquest in the early years of the 13th century. After taking the important town of Alcántara in 1213, King Alfonso IX of León handed over the whole of the west of the current province of Cáceres, firstly to the Order of Calatrava and in 1218 to the Order of San Julián del Pereiro, which from then on was known as the Order of Alcántara. Indeed the first documentary mentions of Brozas (as “Las Broças”) were in 1237 and 1244; in about 1270 it became the headquarters of the High Command of Alcántara. 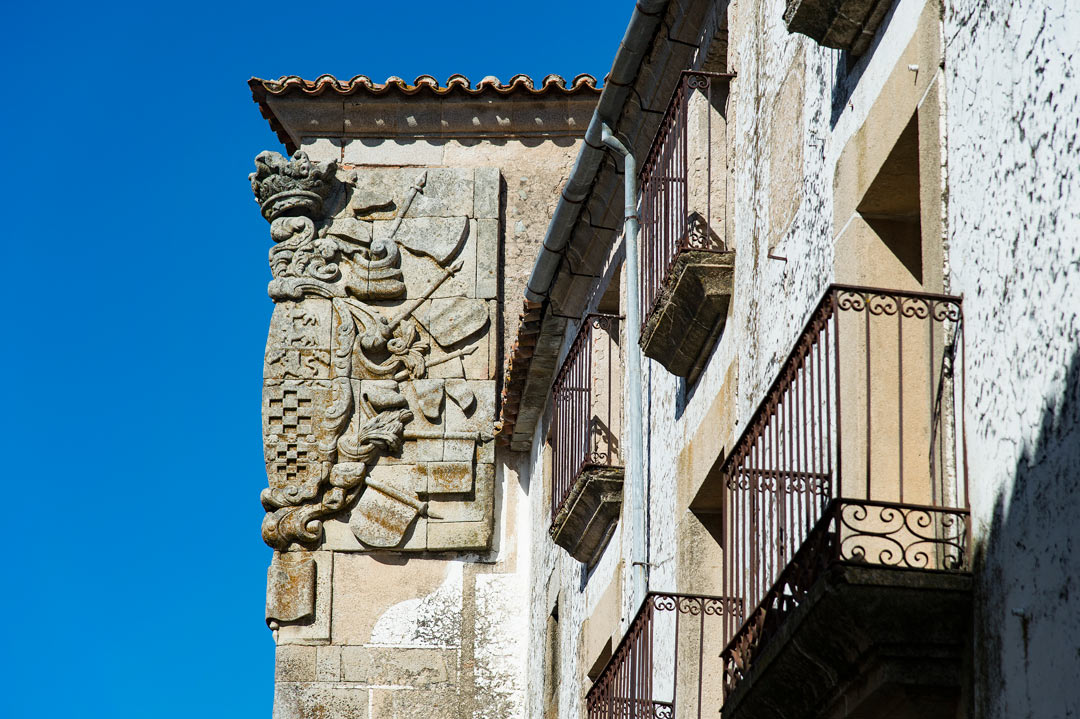 The conflicts with Alcántara on the use of uncultivated and common land led to the inhabitants of Brozas initiating the process of emancipation by being declared a town. This was achieved in 1537 by a royal document from Charles I which cost 7,500 gold ducats and involved a considerable growth in population.

Its heritage includes in particular its religious buildings such as the Church of Santa María la Mayor (a National Monument); military constructions such as the Fortress of the High Command of the Order of Alcántara (13th-18th centuries); and civil constructions with fine coats of arms of noble families, among which stand out the Casa Palacio de los Argüello-Carvajal (declared an Asset of Cultural Interest) and the Palacio de los Condes de la Encina. Moreover, nature lovers will be able to enjoy as many as 7 protected spaces, which are ideal for birdwatching and open-air activities.

If you want to explore and get to know Brozas in an original and entertaining way, don’t miss this Outdoor Escape Route. 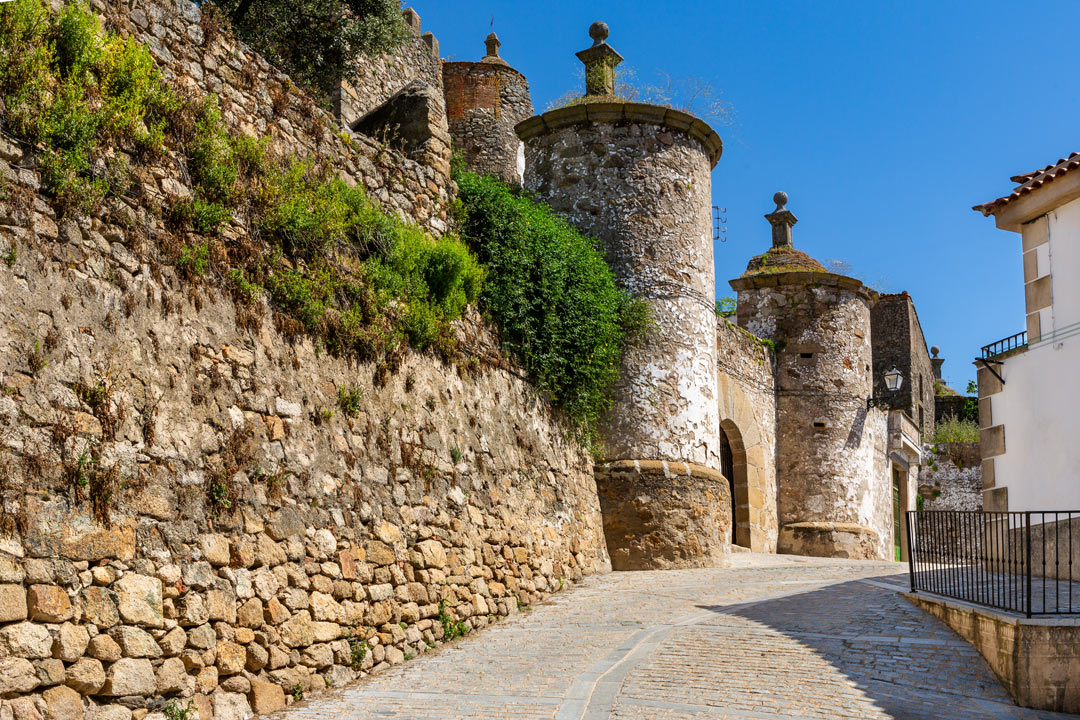 Palace-Castle of the High Command

Known as “the palace”, the origin of Brozas Castle lies in the 14th century although it has subsequently been remodelled several times, for example in the 16th and 17th centuries.

Brozas Castle was the residence of the Knight Commander and witnessed violent military confrontations, firstly in the civil war of the Order of Alcántara (15th century) and subsequently during the continuous wars of the Modern Age (that of Portuguese Restoration, that of Spanish Succession between Philip V and Charles of Austria, and the Peninsular War). Evidence of these conflicts can be found in the form of the remains of the bastioned walls which can be contemplated in the outer enclosure of the fortress and the large doorway with the coats of arms of Philip II as Grand Master of the Order and of the Knight Commander Cristóbal de Moura.

In the interior several palace rooms were constructed such as the stables, the so-called “old room” with Gothic doorways, the “new room” which contains the coat of arms of Juan de Zúñiga, and the patio which both rooms overlook of which two wings have survived, both of which are porticoed with Tuscan columns. The Keep also stands out; it has been dated as belonging to the early 14th century and has a cistern at its base.

The castle is currently private property, although there is free access to the exterior. 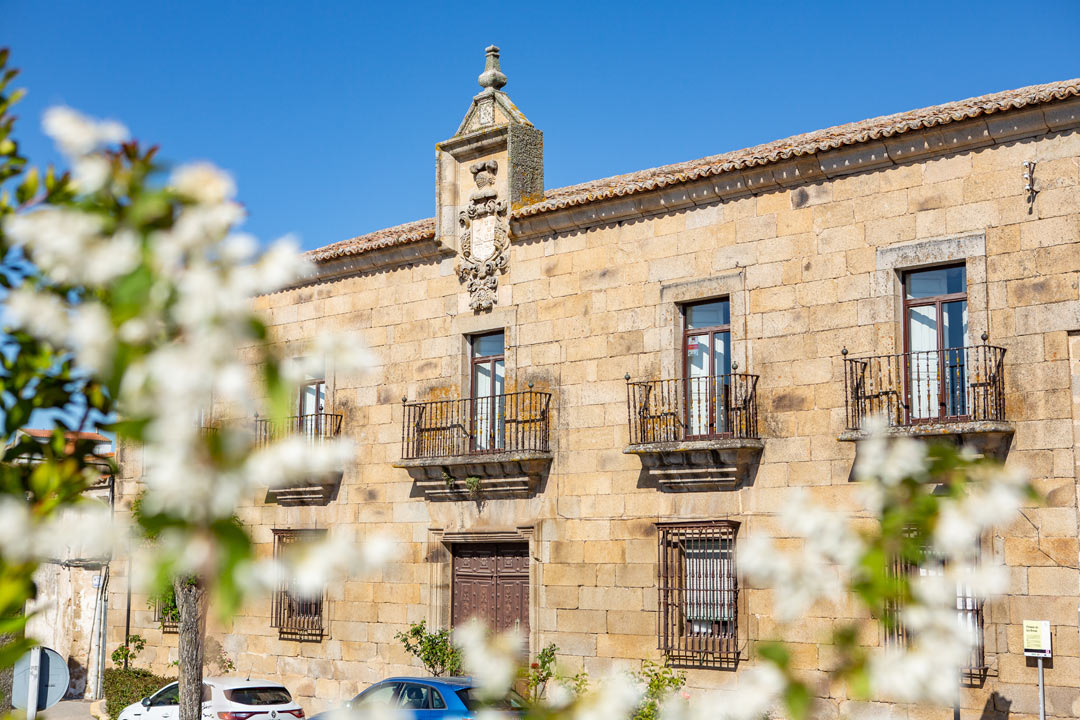 Situated in the Plaza de Ovando or “Plaza Nueva”, the Palacio de los Bravo, Condes de la Encina, is the best example of residential architecture in Brozas. Built in the late 16th century, its architectural characteristics are typical of the 17th century; it was however in the 18th century when the family was most powerful and Juan Sebastián Bravo de Cabrera became Count of La Encina in 1778.

The exterior is known for its simple façade built entirely with granite ashlars and is crowned by a projecting cornice which is broken in the centre by a attic in which is inserted the coat of arms of Juan Sebastián and his wife Isabel Topete del Barco. The interior surprises us with a large peristyle patio shaped by four large arches lowered on pillars. 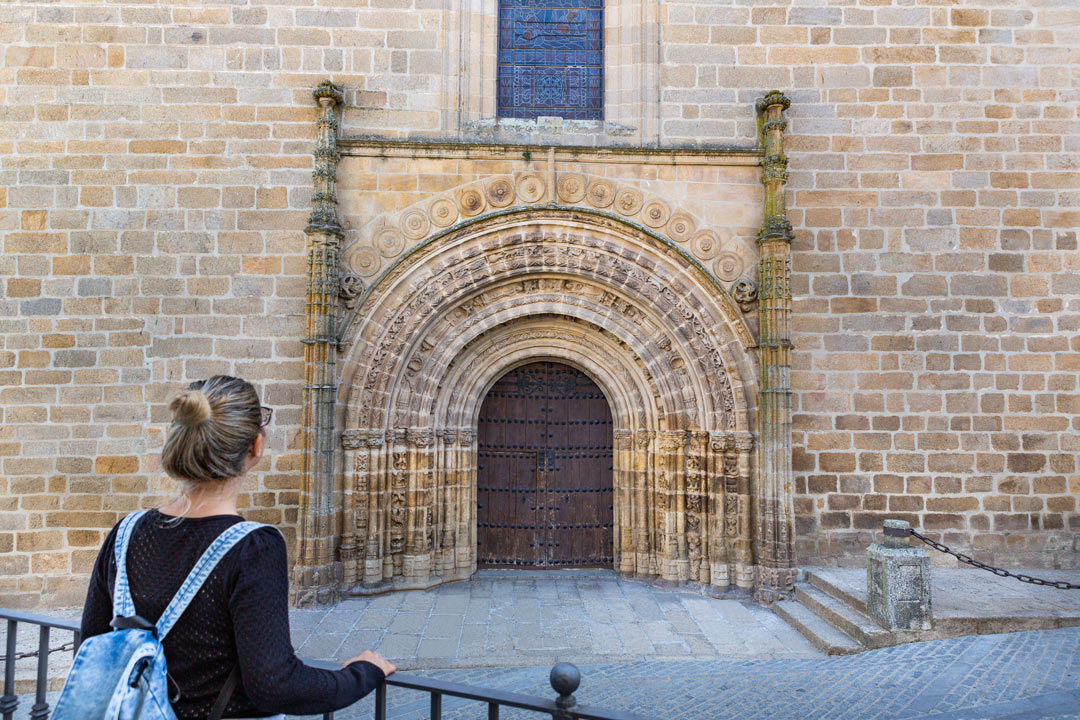 Built on former Roman and Visigothic temples, the current church had a very long construction period from the late 15th century to the mid-18th century in which architects of renown such as Pedro de Ybarra, Juan Bravo, and José Larra Churriguera took part.

The exterior is very sober with forms halfway between Gothic and Renaissance styles. The façade of the foot stands out as in it there is a majestic rounded doorway which is beautifully decorated with late Gothic religious, mythological, and floral motifs; there is also a large Renaissance window flanked by ancient gargoyles and medallions with vases of Madonna lilies.

In the interior the ribbed vaults stand out; they cover the three naves of a church conceived as a “hall church”, together with various funeral chapels which hold tombs of noble Brozas families (Gutiérrez-Flores, Bravo, Orive-Salazar). The following are likewise noteworthy: the extraordinary baroque altarpiece of non-polychromed wood (from about 1750), the baroque organ in the choir (about 1780) and little treasures such as the small wrought-iron doves which support the censers and the Visigothic capitals used as fonts of holy water. 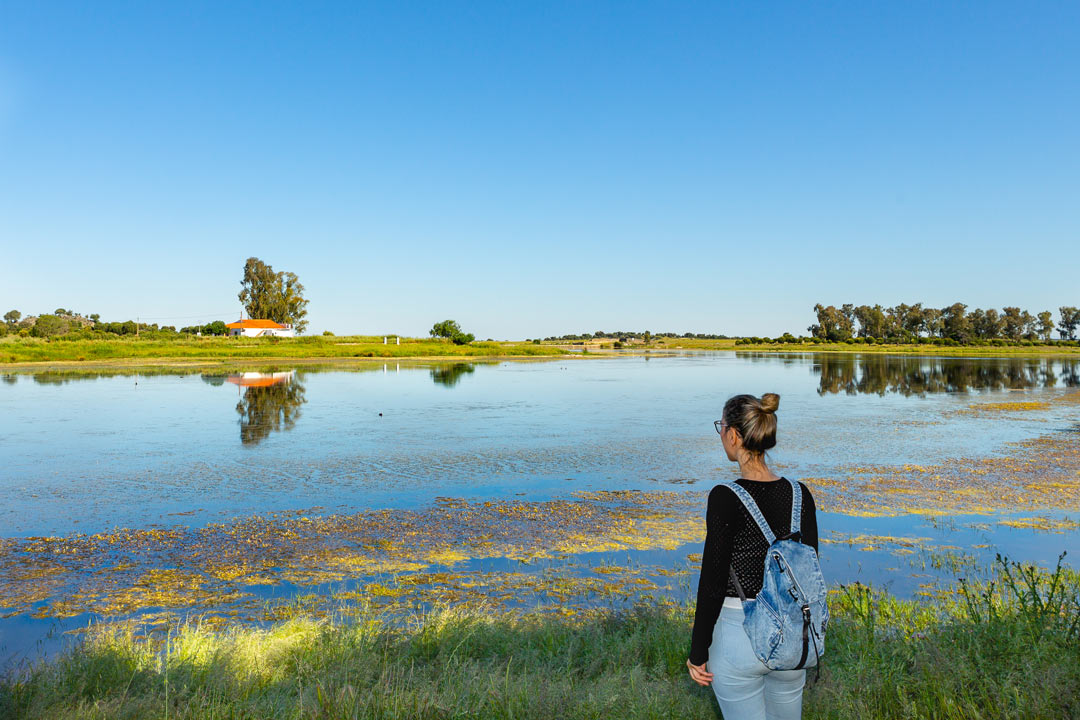 Located 500 metres from the built-up area of Brozas, the Brozas Pool was created in the 15th century as a resting place for the flocks of sheep which descended from northern lands to the dehesas of Tajo Internacional. From then on the pool became a space with historical, natural, and cultural connections as a watering place for livestock, a tench farm, a place to manufacture tiles and bricks, and a favourite spot for strolling along its banks.

During all four seasons the Brozas Pool is a paradise for bird-lovers as it allows the observation of innumerable species such as the spoonbill, the coot, the great crested grebe, the kingfisher, the black-winged stilt, and the little grebe. Moreover, between March and October fishing enthusiasts can enjoy their hobby by taking the famous tenches, a local delicacy.

For 365 days of the year you can experience spectacular sunsets either on foot or on a short cycle touring route on the marked paths and trails in the territory of the nature reserve.