The historic enclaves of Tajo Internacional on the Portuguese side

The Portuguese side of the Tajo Internacional Nature Reserve has very interesting historical towns and villages which are well worth a visit. In the area of Portugal Centro the parishes of Penamacor, Idanha-a-Nova, Castelo Branco, and Vila Velha de Rodão belong to the reserve and three historical villages stand out: Monsanto, Penha Garcia, and Idanha-a-Velha.

In the area of the reserve in the Alentejo, magical enclaves can be found all along the Sierra de São Mamede: Castelo de Vide, Marvão, Portalegre, Gavião, and Nisa. Here you have a short guide to the most interesting enclaves. 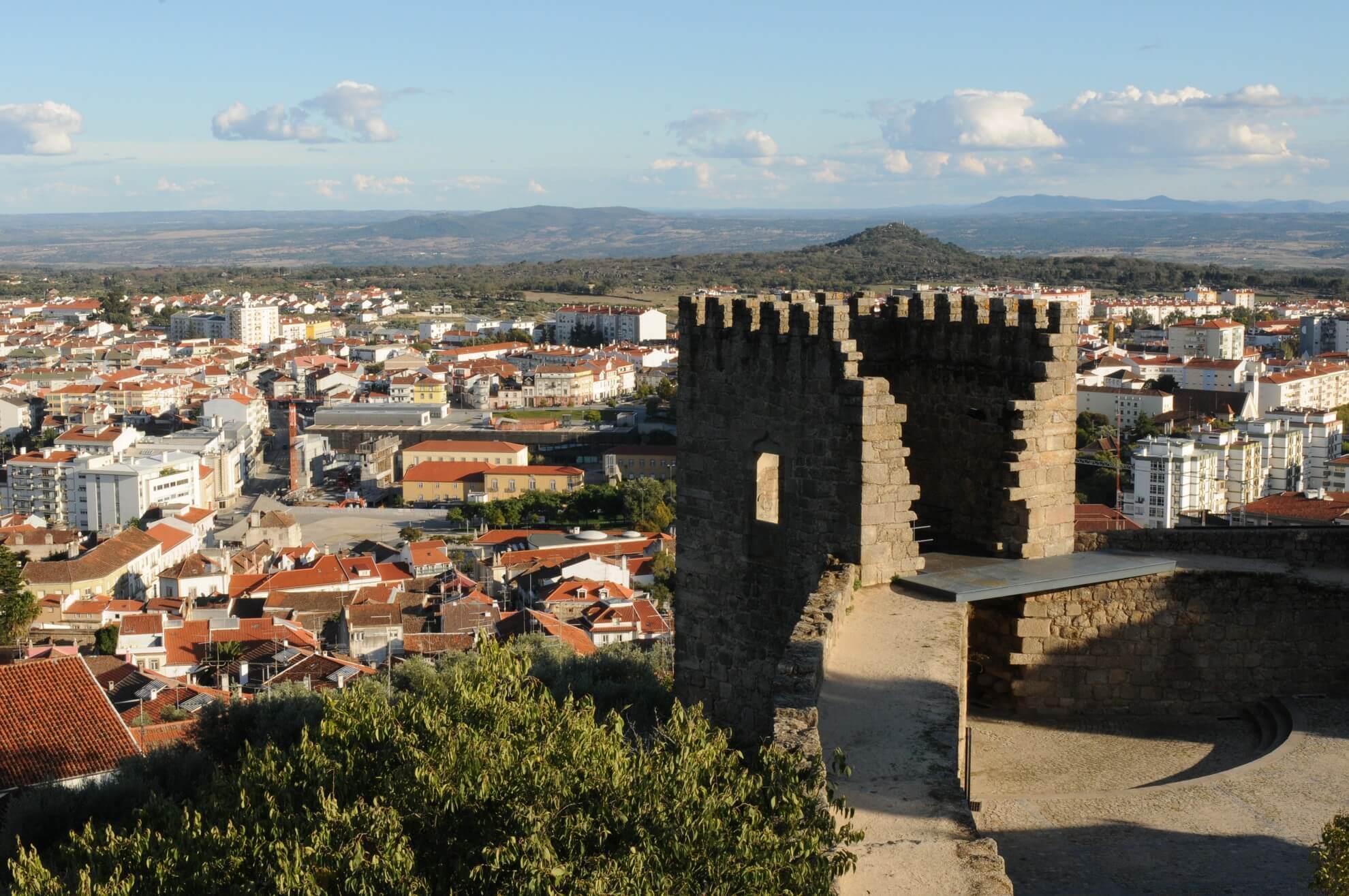 Its name literally means “White Castle”. The founding of the town is attributed to the Knights Templar, who erected its castle and city walls between 1214 and 1230. Under King Manuel Castelo Branco received a new royal charter and saw its population grow and the built-up area of the town expand. Even today the narrow streets proudly display 16th-century houses with decorated doors and windows as symbols of the wealth of the merchants who lived in them. In the following years Castelo Branco received from the Crown the title of notable town and saw the construction of two important churches with a sumptuousness which deserves a leisurely visit: La Misericórdia and the Church of São Miguel, the current Sé (Cathedral). Nuno de Noronha subsequently had built the magnificent building of the Paço Episcopal, a symbol of the urbanity and national importance of the town at that period. 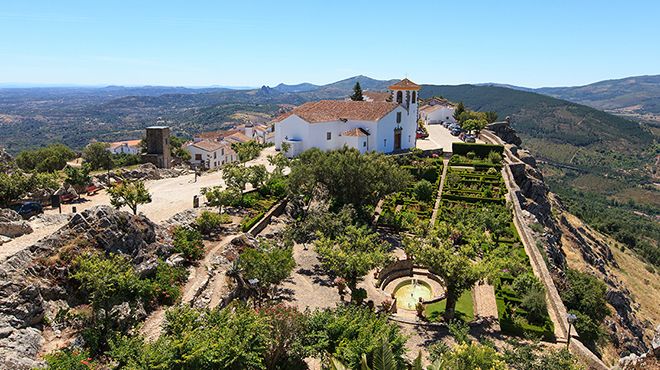 Between Castelo de Vide and Portalegre only a few kilometres from Spain we find the peaceful village of Marvão at the highest point of the Sierra de São Mamede. Geographically Marvão is a natural strategic point of defence with very steep hillsides to the north, south, and west; access on foot is only possible on the east side which is where the population has grown.

Within the walls a magnificent ensemble of traditional architecture from the Alentejo is revealed. In the narrow streets of Marvão it is an easy matter to discover Gothic arches, Manueline windows, wrought iron balconies, and other details of interest in places characterised by local granite. Its heritage includes not only the castle and the walls which are hard to forget but also in particular the Church of Santa María which has been transformed into a Municipal Museum, the Church of Santiago, the Renaissance Chapel of the Espíritu Santo, and the Convent of Our Lady of la Estrela outside the walls. One of the main reasons for visiting the village is the fine view of the region. 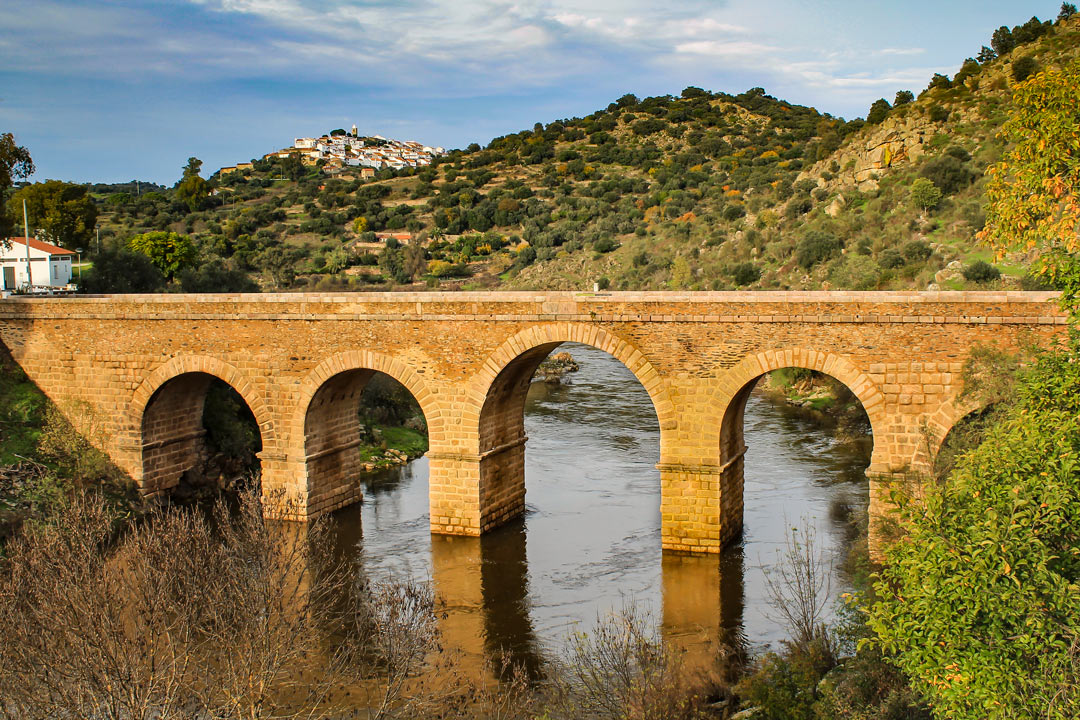 The parish of Segura belongs to the municipal district of Idanha-a-Nova. History shows Segura to have been a frontier fortress and indeed the village came into its own after the construction of the Segura Bridge to define itself as the guardian of the passage. It was a town and an administrative centre between 1510 and 1836 when it was annexed to the municipality of Salvaterra do Extremo. It has architectural affinities with Spain which can be seen in its sober houses, which are almost always white and with wrought iron railings marking the balconies and the windows.

The Igreja Matriz is an ancient church which has recently been restored using elements of the 18th-century construction programme. From here can be seen the built-up area of Segura defined between two heights, that of the Rua do Outeiro and the castle which is higher and further away, the emplacement of the medieval fortress designed by Duarte d’Armas. At the opposite end of the village stands the Church of La Misericórdia, which is known to have existed since at least the early 17th century; it is noteworthy for its portico and its belfry and is an important building in the context of the Holy Week celebrations in the village.

Of the natural heritage we can highlight old paths which lead us to the River Erges and the solid walls of the dams which join mills and banks and a protected area of the Tejo Internacional Nature Reserve. Between two mills, Azenha do Roque and Moinho das Freiras, the Erges flows in a gorge, Las Fragas, which is one of the most interesting landscapes and geological sites in the region. 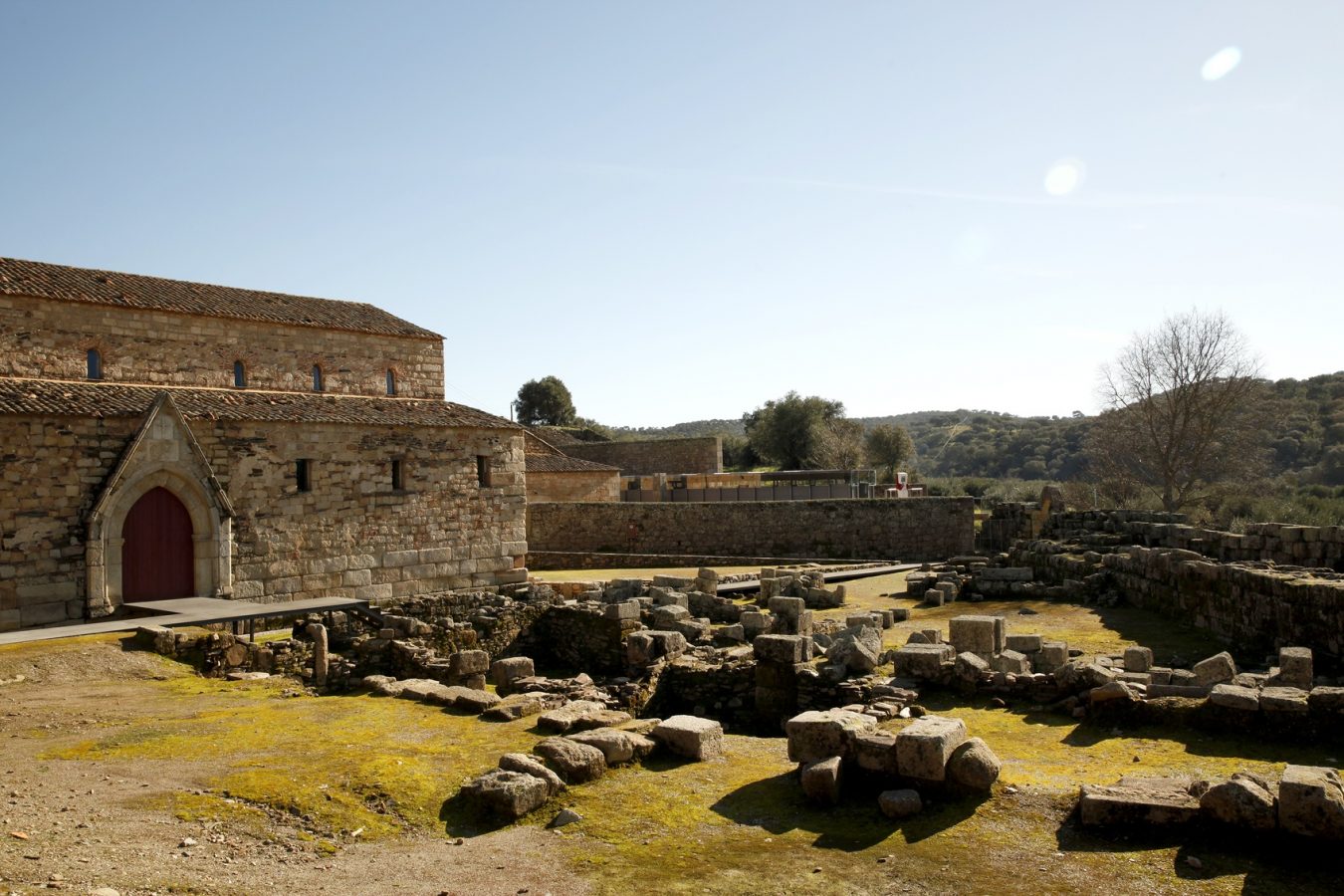 Idanha-a-Velha is a historical village located in a valley full of farms and olive groves. It was a prosperous town founded by the Romans under the name of Igaeditanorum which came to be an episcopal see. Its medieval walled enclosure dates from the 3rd and 4th centuries. The Roman walls still define this village which attained its greatest splendour under the Visigoths when it was known as Egitania; it was they who built a cathedral and made Idanha the capital of the region. In the centre stands the mother church (the 16th-century Antigua Misericórdia) and the Manueline pillory. To the south we find the Visigothic ex-cathedral, which despite having undergone numerous reconstructions still retains the characteristic structure of three naves divided by horseshoe arches. It is worth visiting the Museo Epigráfico in which are crowded together over two hundred gravestones from the area with Latin inscriptions; the Lagar de Varas with its surprising traditional olive press; and the Idanha-a-Velha Castle which is also known as the Torre dos Templários. 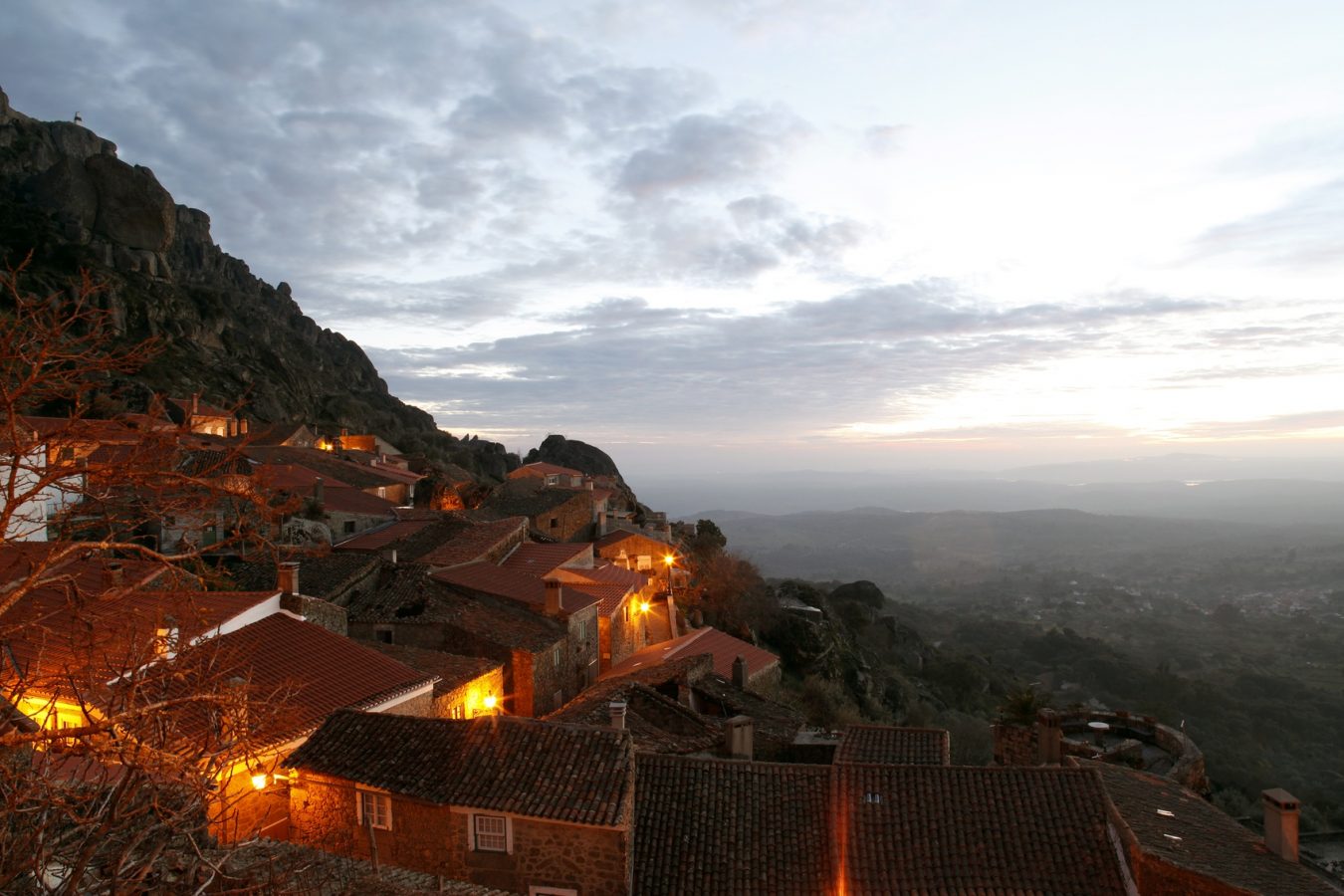 This village rises above the plains of the vicinity and is the perfect setting for strolling in its steep paved streets which are flanked by stone houses in harmony with the rocky landscape which surrounds them.

The village of Monsanto has been very well preserved against modernisation since in 1938 it won a national competition for being the “most Portuguese” village in the country. Some of its houses are surprisingly sumptuous and have Manueline entrances and stone coats of arms. It is rather isolated but this is precisely part of its charm and can be fully appreciated on the shepherds’ paths which rise from the village to the 13th-century Monsanto Castle. This abandoned fortress on the mountain top affords impressive views in all directions. In the vicinity of this village, right on the border, lie the famous Roman baths of Monfortinho. 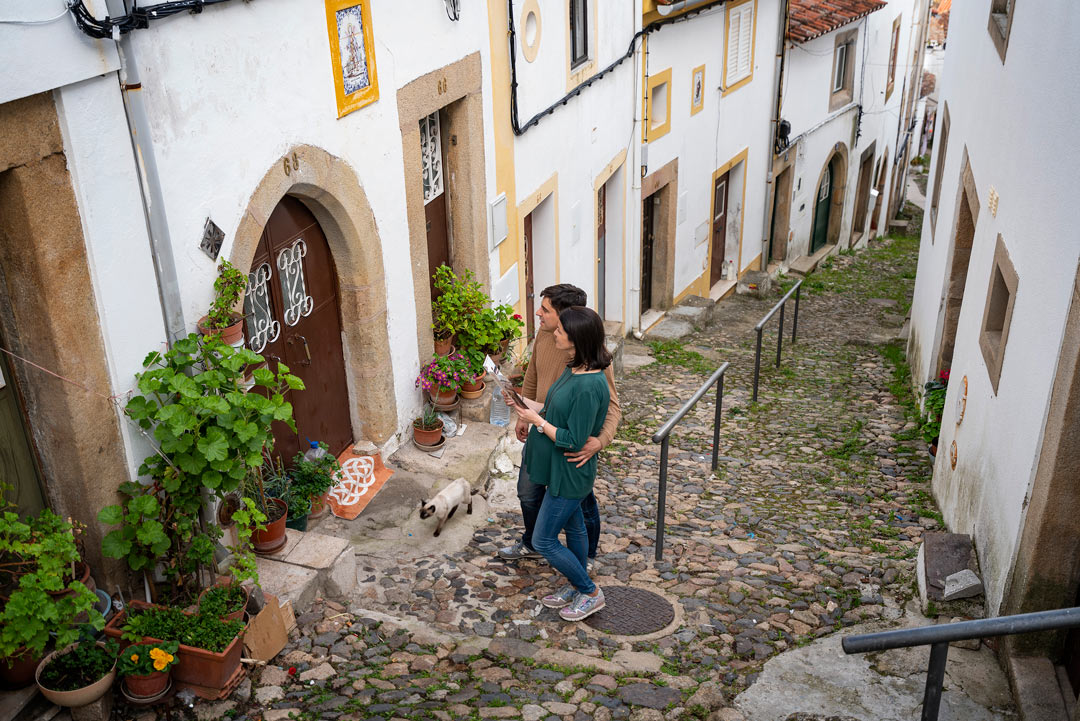 Castelo de Vide is one of those magical places which one comes across unexpectedly on the border between Spain and Portugal. Don’t miss the castle and the hamlet which has been sheltered by it for centuries together with other Sephardic treasures. Now is when you will discover those traditional streets of whitewashed houses and doorways with pointed arches. The street up to the castle is certainly a steep one but when you reach it the effort will have been worthwhile. What you will find is a fortress with a village inside it, a veritable labyrinth of alleyways decked with flowers which give the place a most pleasant aroma. It should be mentioned that the town has won numerous awards for its cleanliness and its floral streets. 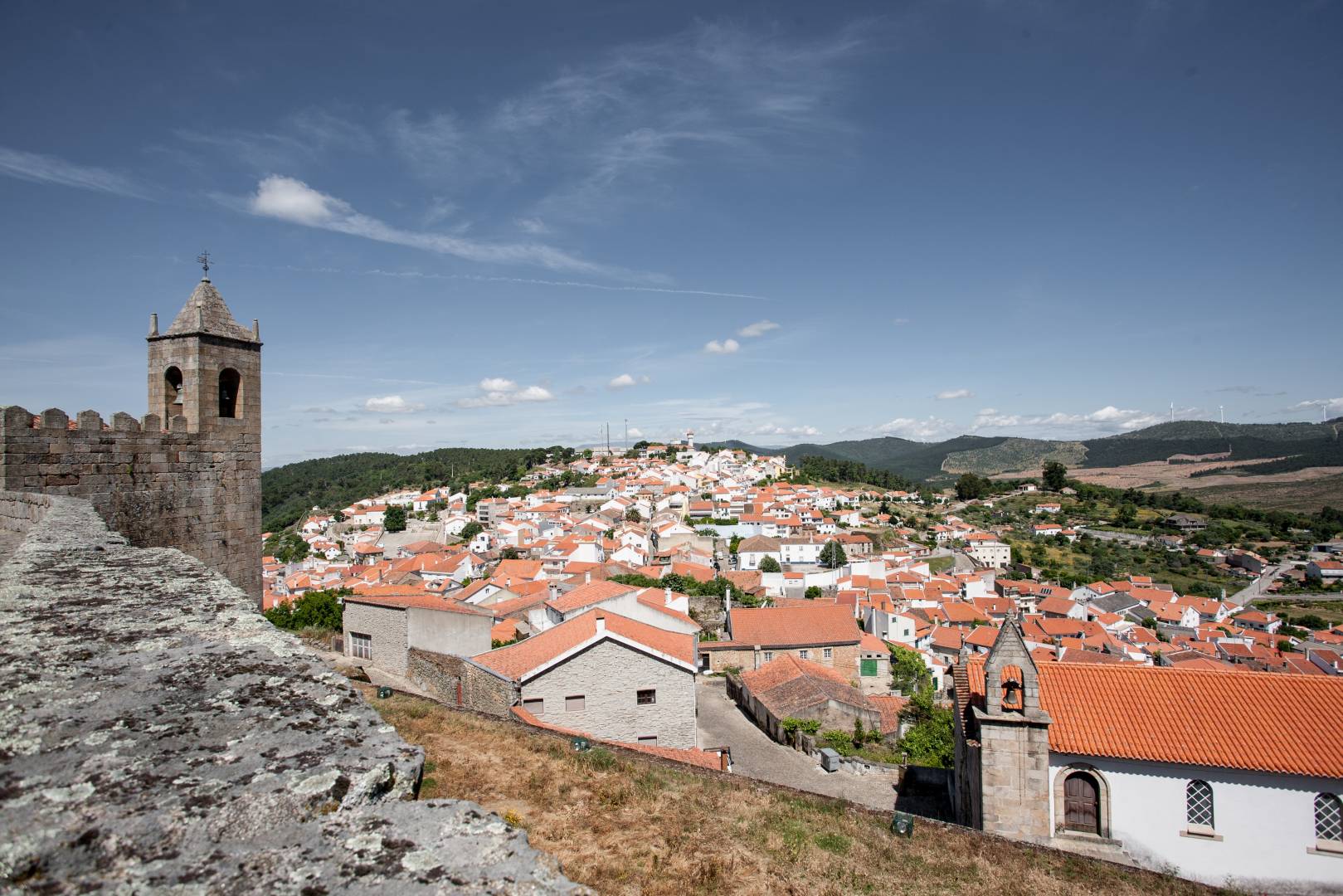 The town of Penamacor in the district of Castelo Branco is situated on a hill at an altitude of 588 metres between the sierras of Malcata and Gardunha on the southern bank of the River Pônsul. Its territory was occupied by Turduli, Romans, Goths, and Moslems until after its conquest it received a royal charter from Sancho I in 1209. Dom Gualdin Páis, the grand master of the Order of the Templars, fortified the town in the 12th century by giving it walls and a castle; the latter has played an important role in the defence of the border since the origins of Portugal.

In addition to its cultural and historic heritage such as the Matriz Church and that of La Misericórdia, the castle, and the watchtower, Penamacor is also ideal for both fishing and other aquatic sports, both on the Meimoa Reservoir and on the River Baságueda.